Two police agencies in Arizona plan to replace their ballistic vests for some of their officers after a particular brand of vest failed a test and allowed a bullet to pass through it. 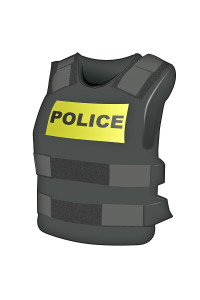 The Arizona Republic reports that about 50 Phoenix police officers and another 56 officers from the Arizona Department of Public Safety will replace their ballistic vests that were manufactured by Custom Armor Technologies.

Other large law-enforcement agencies in metropolitan Phoenix discovered they will not have to replace any vests after researching the specific manufacturers and model numbers of the vests their officers wear.

Last month, a union representing Phoenix police officers asked a lab in Oregon to test one of the Kevlar-lined vests after a similar vest failed during a November trespassing call in which officer Tony Daley was shot through the lower-left abdomen.

The lab test resulted in a bullet fired from a .44-caliber handgun passing through the vest and two other bullets going deep enough into the Kevlar to fail a test that measures blunt-force trauma.

Concerns about the vest first arose in Phoenix after Daley and another officer responded to a trespassing call at a trailer park on Nov. 26.

Investigators allege that when the officers approached the trailer, Joseph Sandoval shot Daley with a hollow-point .40-caliber bullet fired from about 15 feet away, said Joe Clure, president of the Phoenix Law Enforcement Association.

Daley continues to recover from his injuries and remains unable to work.

Phoenix authorized any officers with Custom Armor vests to replace them and will pay officers $800 for the old vests once they have purchased replacements, said Sgt. Trent Crump, a spokesman for the Phoenix Police Department.

Once police have collected the vests in question, administrators will work directly with Diamondback Tactical, the parent company of Custom Armor, to work out a reimbursement system, Crump said.

“They’re reaching out to us, in communication with us and being very helpful,” Crump said.

The company issued an “advisory notice” in the days after Phoenix police announced that the vest had failed testing, offering to replace vests that match the specific model and lot number in the failed test.

On March 2, company officials said they were still waiting on test results to determine if there is an issue with the vests, but the offer to replace vests matching those specifications remained in place “out of respect for the concern of officer safety.”

State officials, citing an abundance of caution, have offered to replace vests for any DPS officers who own those manufactured by Custom Armor, regardless of make or model number, said officer Carrick Cook, a department spokesman.