Efforts to educate Wyoming youths about drinking and driving appear to have had an effect in the past two years, but getting youths to buckle up has been less successful, according to a statewide survey of middle and high school students. 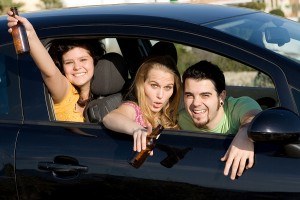 In 2011, 11.7 percent of high school students surveyed said they drove a vehicle one or more times during the past 30 days when they had been drinking alcohol, according to a Youth Risk Behavior Survey released this week.

That is down from 13 percent in 2009 and is the lowest since the survey started asking the question in 1995.

In addition, 25.7 percent of high school students said they rode one or more times during the past 30 days in a vehicle driven by someone who had been drinking alcohol, down from 28.9 percent in 2009. The 2011 finding also is the lowest since 1995.

Similar downward trends can be found in the survey of middle school students who were asked if they had ever ridden in a car driven by someone who had been drinking alcohol. In 2005, 2007 and 2009, about 35 percent reported they had, while this year the number dropped to 29.7 percent.

“We’re bringing more awareness to the state, which I feel is a direct result in that lower number,” said Sgt. Duane Ellis, a safety education coordinator with the Wyoming Highway Patrol.

Ellis visits schools around the state to speak about the consequences of drinking and driving and not using seat belts.

“We encourage them to stay sober, and not drink and not get in vehicles where people had been drinking,” he said.

He noted the efforts of other groups such as Mothers Against Drunk Driving and the Governor’s Council on Impaired Driving.

However, extensive efforts to educate students about seat belt use don’t appear to be having the same results.

Among high school students surveyed, 15.8 percent said they never or rarely wore a seat belt when riding in a car driven by someone else. That is down slightly from 16.5 percent in 2009 but higher than in 2005 and 2007.

“This young teen, young adult driver, their age group across the nation has one of the lowest seat belt use rates of all age groups,” Ellis said. “A lot of that is their thinking of invincibility and it’s not going to happen to them – all of the things young kids typically think.”

Ellis said the patrol has done numerous school assemblies and classes with simulated crashes, special rollover machines and other efforts that emphasize “how one little thing can change somebody’s life forever.”

Wyoming has among the lowest seat belt usage rates in the nation, but attempts to toughen the state seat belt law failed in the 2011 Legislature after opponents said it would be too intrusive.

The risk survey was conducted among 2,279 middle school and 2,519 high school students in schools across the state.

It questioned students about drugs and alcohol use, physical activity, violence, tobacco use, diet and other health and safety matters.

– More high school students ate fruits and vegetables five or more times per day over the previous week: 11.5 percent in 2011, compared with 9.9 percent in 2009.