The reek of urine and unwashed bodies hung over the former Occupy Los Angeles camp Wednesday as masked sanitation workers hauled away 25 tons of debris from the barren lawns around City Hall. 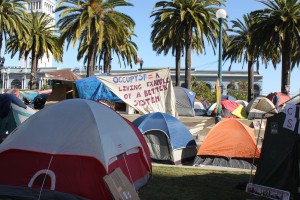 Collapsed and overturned tents, scattered bedding, paperback books, bicycles, shoes, food and other belongings were tossed by shovel or pitchfork into trash trucks after a small army of police peacefully swarmed the nearly two-month encampment. City officials who had tolerated the economic protest for weeks had finally declared the area a health and safety hazard earlier in the week.

Crews set up concrete barriers and chain-link fencing around the sea of debris and dirt that used to be grass. Left behind was a sea of belongings. Frontloaders scooped up larger items, including wooden cabinets.

“It’s so contaminated, it doesn’t even make sense to sort it out,” said Jose “Pepe” Garcia, 49, superintendent of the city’s north central sanitation district.

A dozen city sanitation workers were suited up in white coveralls, gloves and boots after reports that there might be a lice or flea infestation, Garcia said.

Sanitation workers had been hauling away as much as 2 tons of trash a day from the site, but hygiene remained a problem despite rows of portable toilets, he said. Plastic gallon bottles of urine and smaller bottles were set aside for special disposal.

Crews have cleaned up homeless encampments with similar issues before but never on the scale of the Occupy LA bivouac.

“This should have been taken care of a long time ago,” she said.

However, one former occupant blamed the police raid for trashing the tent city.

Samantha Schrepel, 27, stood by a stroller containing her 5-month-old son, Kenny, on the sidewalk in front of the fenced-off lawn and chatted with police officers guarding the site.

Schrepel had been staying in the tent city but was elsewhere when it was raided. Her tent, warm blankets and other items were being trashed as she watched.

“It’s a mess,” she said. “When I was there, my area was always clean. We had people who swept the sidewalks. I think everything got crushed in the chaos.”

Schrepel was philosophical about her loss.

“I think it’s teaching us that these are just (material) things,” she said.

The encampment turned the once-lush City Hall lawns into patches of dirt strewn with debris. Crude graffiti was scrawled on some City Hall walls. A treehouse constructed of wooden pallets lashed to four palm trees stood empty. It was decorated with U.S. flags, a pinata, various secondhand objects and signs that read “free hugs” and “we are the music makers, we are the dreamers of dreams.”

Occupy LA protesters destroyed the grass, damaged trees and sprayed graffiti on statues before the statues were boarded up, said Leo Martinez, a division manager with the city sanitation department.

“I understand the political statement they’re trying to make. But I don’t like the way they went about getting the message across,” he said.

“Look at all the damage they caused,” Martinez said as he surveyed the heaps of debris.