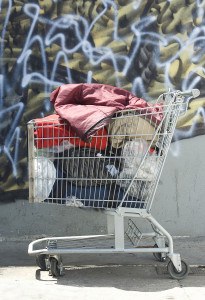 Everything from toasters to typewriters is piled high on a Skid Row sidewalk in Los Angeles, Calif., under the watchful eye of a woman who calls herself Mercedes Benz.

The sidewalk is public property, but the possessions are hers and her neighbors, setting up a conflict between the homeless and a city trying to bring order where chaos reigns. Since a federal judge ordered the city four months ago to stop seizing property from Skid Row streets, sidewalks already teeming with people are now crammed with stuff.

“We know there’s a court order. The city can’t take it,” said Benz, a Vietnam veteran, who sleeps on the pavement amid the mish-mash. “But it’s dangerous. A lot of people steal.”

The items might indeed be discarded junk, but to the nation’s densest concentration of homeless they’re someone’s worldly goods and they have nowhere to put them.

A quick survey of the area recently revealed 20 packed shopping carts lined up along one block. A tent stood on a street corner with a makeshift barrier around it. Another block boasted an empty golf bag, a playpen, a dusty computer monitor and a vacuum cleaner among many sundry items.

“This would never be tolerated in other areas of the city,” fumed Estela Lopez, executive director of the Central City East Association, which represents downtown business owners near Skid Row.

The battle over sidewalk storage has been fought in a number of cities, with courts and juries repeatedly finding that property of homeless people cannot be wantonly seized simply because it’s on the street.

Nowhere, however, has the issue ping-ponged between courtrooms and streets as much as Los Angeles, where the city has lost four lawsuits over property seizures since 1987.

The recurring lawsuits underscore the city’s constant struggle to deal with Skid Row, a 50-block area where nearly 1,000 mostly mentally ill or addicted people sleep on the street at night and another 3,000 reside in missions and designated housing.

In the latest case this year, eight homeless people sued the city after their possessions were picked up and destroyed during Skid Row street sweeps when they left them unattended – either to eat or shower at a nearby shelter or attend appointments such as court appearances.

“It clearly wasn’t abandoned property, they just took it,” said attorney Carol Sobel, who has filed three of the suits against the city. “It is an ongoing problem because there is no political will in this city to address the problem of homelessness.”

In court filings, the city disputed the homeless people’s accounts. Police regularly warn residents of upcoming street sweeps and a public works investigator, who serves as a liaison between maintenance workers and the homeless, allows them to retrieve property not yet picked up and advises them where they can get things already in the truck.

U.S. District Court Judge Philip Gutierrez ruled in June that confiscations without warning or notice where owners can claim property were illegal and ordered the city’s public works and police departments to stop taking residents’ possessions.

“The city’s interest in clean streets is outweighed by plaintiffs’ interest in maintaining the few necessary belongings they might have,” Gutierrez wrote in his opinion, which the city has appealed.

Since then, the streetscape has deteriorated. The number of daily truckloads of trash and debris collected has dropped from about four to two, while the number of people sleeping on the street has jumped at least 30 percent because they can leave mattresses and tents on the sidewalks.

Having tents standing all day allows them to become venues for drug dealing and prostitution, said police Lt. Paul Vernon. Robberies and assaults are up because there’s more to steal.

“It’s a huge step back for conditions here,” Vernon said. “It’s very frustrating. We don’t want to infringe on any civil rights or personal rights but we’re talking about the greater good of the public.”

Residents say police seizures are unfair, but people are now taking advantage of the court order to set up household furniture on the street. “There’s got to be a compromise,” said Skid Row activist General Jeff. “It’s blocking sidewalks, affecting wheelchair access.”

Nine years ago, business owners in the Central City East Association came up with a solution after possessions blocked loading docks and driveways, and posed a health hazard to food-related businesses.

A business donated a warehouse and another contributed 600 wheeled bins for the homeless to store their belongings. People sign up for a bin, which must be renewed every week. If the person does not show up to renew, the bin is emptied. The items are stored two months and then discarded.

The bins are secured behind a chain link fence.

“We desperately need more centers like this. Still, it’s this much of an answer to the problem,” said association executive director Lopez, holding up her fingers an inch apart.

The association and the Los Angeles Homeless Services Authority pick up the $100,000 annual tab for the facility, which runs at full capacity.

But some can’t cope with even the center’s basic rules.

“Collecting things defines ownership. To a tragic extent that defines home for them,” said Neil Donovan, executive director of the National Coalition for the Homeless. “This speaks to the need for mental health services.”

For Benz, who’s been homeless for three years, keeping track of her belongings, along with her health and legal problems, has been overwhelming. She tried the storage center a couple of times, but kept missing the renewal date.

The 57-year-old uses a broom to sweep her area of urine-stained pavement and a piece of broken mirror to neaten herself. A number of camera bags are strewn around her feet. She placed an orchid in a water bottle on the sidewalk next to her chair for something pretty to look at amid the mess.

Benz, who said she receives disability for Agent Orange exposure, lost all her belongings in a street sweep earlier this year while she used the bathroom at a mission, but acknowledged she was warned the day before by a police officer to remove her stuff. “I just couldn’t think carefully enough as to the next step,” she said.

The loss of court papers, clothes and other items was devastating. “I came out and thought I was on the wrong street. You know, what I did? I actually cried,” she said. “I became lost outside all over again.”