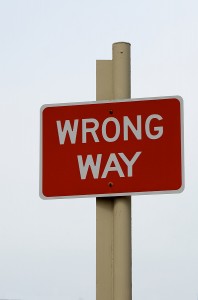 Wrong-way drivers have become an increasing problem in Arizona over the past few years.

The National Highway Traffic Safety Administration said that 23 people in Arizona died in crashes in which a driver entered a road against traffic or drove on the wrong side of the road in 2009, the latest year with available data.

To combat the problem, the Arizona Department of Transportation is testing new technologies and road markers, according to The Arizona Republic. Safety engineers hope the right combination will keep some people from entering freeways the wrong way and alert other drivers and Highway Patrol officers if they do.

ADOT has experimented with a system that detects cars before they enter a freeway. It also has tested road reflectors and lowered “wrong way” signs to eye level. Even though that system is years away, the ultimate goal is to connect it to the state’s traffic-control center, which can send automatic alerts to Highway Patrol units and to electronic highway signs for motorists.

In most wrong-way driving cases, the driver realizes the error quickly and disappears before patrol officers arrive. But when accidents occur, they can be catastrophic. The crashes tend to be more severe, often involving multiple cars and more forceful impacts.

NHTSA faulted drunken drivers in three-quarters of all wrong-way crashes, an assertion repeated by state officials.

“We see a lot of serious-injury and fatal wrecks as a result of DUI drivers driving the wrong way on the freeway,” said Carrick Cook, an Arizona Department of Public Safety spokesman.

The federal agency also found that wrong-way drivers have more traffic violations, felony convictions and other accidents than the average motorist, and that wrong-way crashes are becoming more common – even as the overall fatal crash rate has fallen to a historic low.

Crews also have embedded radar-based detectors at an off-ramp at the intersection of Interstate 17 and the Carefree Highway. They used cameras to check how accurate the detectors were.

Last month, it installed raised pavement markings on off-ramps at seven intersections in the Phoenix metropolitan area. The markings, called “cat’s eyes,” are dark in the proper direction of traffic, but wrong-way drivers see a red reflection.