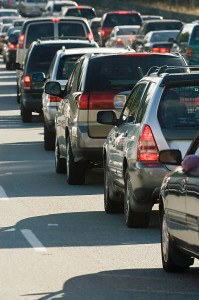 The morning commute threatened to be unusually long Thursday at the nation’s busiest border crossing after all U.S.-bound traffic was halted the previous day because scaffolding had collapsed, falling on more than a dozen cars and injuring 11 travelers and construction workers.

Pedestrian traffic had resumed eight hours later after the accident at the San Ysidro crossing between San Diego and Tijuana, Mexico, and 13 of 24 vehicle lanes reopened at midnight – well before the morning rush.

Still, about 50,000 vehicles and 25,000 pedestrians enter the United States each day at the San Ysidro crossing, and officials didn’t expect the remaining 11 lanes at the crossing to reopen Thursday.

A section of scaffold installed to protect cars from overhead construction collapsed onto eight northbound lanes shortly before 11 a.m. Wednesday, officials said. It left a mangled mess of wooden planks, metal supports and black tarpaulin atop 15 vehicles that had just passed through inspection booths.

A construction worker was seriously hurt, said Maurice Luque, spokesman for the San Diego Fire-Rescue Department. Ten others were taken to hospitals with minor injuries, including a pregnant woman, he said.

Three people had to be extricated from cars, while the others walked away, Luque said.

The cause of the collapse was under investigation. An investigator from the federal Occupational Safety and Health Administration was at the scene Wednesday.

The General Services Administration, which owns the ports of entry, was assessing the integrity of the remaining scaffold before deciding when San Ysidro’s remaining vehicle lanes would reopen.

Waiting times to enter the U.S. at Otay Mesa on Wednesday afternoon reached about 2 1/2 hours for motorists and two hours for pedestrians, about twice the normal delay, Jaramillo said.

The San Ysidro border crossing facility is undergoing a $577 million overhaul by Hensel Phelps Construction Co., based in Greeley, Colo.

Randy Barr, an operations manager for the company, said that at the time the scaffolding collapsed, workers were removing plaster from the port of entry’s administration building that will be demolished.