Gus Rodriguez looks more like a soldier than a jewelry store security guard, with a Beretta handgun strapped to his bulletproof vest, shades wrapped around his shaved head and pepper spray bulging from a breast pocket.

“I am not afraid,” the former Ecuadorean military man says, patting his pistol. “They call me Rambo.”

After a summer of brazen attacks on gold stores, parts of downtown Los Angeles now look more like a militarized zone than a commercial corridor. 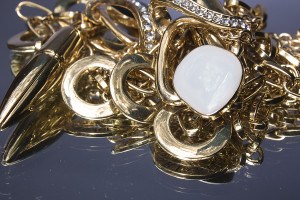 The gold fever that has driven prices to an all-time high is also fueling a crime spree in the precious metal. Police nationwide are seeing an uptick in robberies and burglaries related to gold prices, which peaked at $1,891 an ounce last month, up more than $600 from a year earlier.

The FBI doesn’t keep numbers for gold thefts but local police departments have plenty of anecdotal evidence of a spike. Dozens of women have had their necklaces snatched in daylight attacks, burglars are targeting gold in homes and robbers in New Jersey even cleared out a mining museum’s irreplaceable collection of nuggets.

The beauty of gold, from a criminal stand point, is that it’s easy to fence. Rings and necklaces can be melted down – destroying the evidence – and sold. Precious items such as diamonds are harder to alter and easier to trace.

There were at least six Los Angeles gold store robberies in June and July. On Aug. 22, four men with hammers were arrested outside a jewelry store, Los Angeles police Lt. Paul Vernon said.

These thefts were suspected to have been carried out by gang members who covered their faces with hoods and hats, then rushed into stores and swiped what they could in a matter of seconds. One surveillance video shows a shopkeeper being blasted by pepper spray while robbers destroy display cabinets and grab what they can.

“Certainly the surging gold prices motivated these people to want to do these smash-and-grabs,” Vernon said. “They are not trading what they steal at the market value of gold. Even if they get it half that, they are making a pretty penny.”

In Oakland, police say dozens of women have had gold necklaces yanked from their necks on the street. More than 100 similar thefts have been reported in Los Angeles, a rash of robberies is taking place in St. Paul, Minn., and police in Phoenix say muggers chatted up high school girls then ripped their gold necklaces from them.

“We’ve never seen this,” said Oakland police Sgt. Holly Joshi. Most of the victims were robbed while distractedly looking at their phones.

In July, thieves smashed open a glass display in the Sterling Hill Mining Museum in New Jersey and made off with about $400,000 in gold samples collected from mines across the globe.

Rodriguez, the LA security guard, hasn’t had to use his weapon in the four months he’s stood guard. The stocky 44-year-old earned his nickname from gang members who he says regularly look him over as they slowly drive past the shops he patrols.

Most of the jewelry stores on Broadway are low-end enterprises with owners keen to make a quick buck buying jewelry, melting it and reselling it. The street alternates from squalid to splendid, dotted with crumbling former theaters and refurbished art deco high rises.

Opposing forces of gentrification and homelessness play out on the street, where hustlers stand outside cheap electronics stores blasting Mexican music and drivers swoop into secured garages beneath newly renovated apartment buildings.

A couple hundred yards down the street from Rodriguez, another gold store guard pops open the leather clasp securing his .357 magnum pistol when he sees two young men walking toward him.

Oscar Quintero says he’s never had to fully unholster his gun but a few weeks ago thwarted a robbery by blasting pepper spray at a man who tried to run away with a gold chain around his neck.