A Washington state couple has settled a lawsuit against Josephine County for $1.2 million after they were injured in a fall from a suspension bridge at a bed and breakfast made up of tree houses. 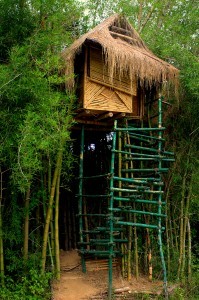 The Grants Pass Daily Courier reports the federal court suit was filed after a 2008 fall at the Out `n’ About Treesort in Takilma.

Court records indicate Michelle Buswinka and Maurice Breslin of Kirkland, Wash., their two children and another family member were guests at the resort in July 2008 and were having their picture taken on the bridge.

“While holding onto the railing, it suddenly and unexpectedly broke, causing the plaintiffs to pitch forward to the ground, head-first,” the complaint said.

The county’s lawyer, Steve Rich, said its insurance company recently agreed to settle the claim, and the money did not come out of the county’s general fund. He said the county didn’t admit liability and settled to avoid more litigation.

The couple argued the county failed to inspect and issue permits for construction of the bridge; failed to require the design to meet applicable standards; and failed to stop the resort from building structures without inspections and permits.

Out `n’ About dates to about 1990. It was created by Michael Garnier, a former Green Beret medic who once ran a health clinic for hippies and became widely known for his tree houses.

Rich said the county’s history with the resort has involved multiple legal actions, including cease-and-desist orders and threats to tear down the tree houses over permit issues. Ultimately, the county allowed Out `n’ About to continue operating under a permit designed for bed and breakfast establishments.

The treesort is permitted to have only five rooms, or in this case, tree houses, Rich said. It has continued to expand. On its website, the resort lists 18 tree houses, rope bridges, zip-lines and rope swings.