With hurricane season barreling down on Florida, the state is seizing on low interest rates to borrow $2.25 billion for its catastrophe insurance fund.

The State Board of Administration Finance Corp. is joining state and local governments that have rushed to sell bonds since yields tumbled this year to the lowest in decades. While rates have edged up over the past three weeks, benchmark 10-year debt is still yielding only about 0.8%, matching the lows seen before the pandemic upended financial markets in March.

“The market has been extraordinarily strong on the demand side and interest rates are very low — those two things don’t normally go hand and glove,” Ben Watkins, Florida’s director of bond finance, said in an interview. “From an historical perspective, this is an extraordinary opportunity.”

The pace of debt sales surged as rates tumbled in July, with the volume of new municipal bond offerings jumping 58% from a year earlier to about $46 billion that month, according to data compiled by Bloomberg. Even with the uptick in rates since then, sales have stayed strong, with another $41 billion issued this month. 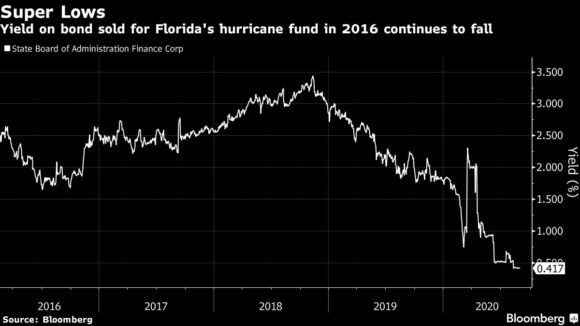 The offering will be the first since 2016 by the Florida Hurricane Catastrophe Fund, which acts as a backstop for the state’s insurance market.

Because of the amount of money already in the fund, Watkins said it didn’t need to borrow more, but the low level of interest rates was too good to pass up.

“We don’t really need to borrow, we want to,” he said. “I don’t know what interest rates or demand is going to be like in five, seven, ten years from now, so lets put some debt on the balance sheet because we don’t know when we’ll need it.”

The bonds are rated Aa3 by Moody’s Investors Service and AA by S&P Global Ratings and Fitch Ratings. They will be federally taxable and marketed to non-traditional municipal buyers, like corporate-debt investors and overseas firms, Watkins said.

The move to shore up the fund comes as scientists anticipate that climate change will cause more damaging hurricanes.

The Florida fund is estimated to incur total losses of about $8 billion from Hurricanes Irma and Michael, which hit the state in 2017 and 2018, respectively, according to projections as of June 30.

Watkins said that the state is preparing for the future by selling bonds now. “It’s out of an abundance of caution and we are looking at how beneficial it will be and how inexpensive it will be to have that borrowing on the balance sheet,” he said.

Millions of Bees Used in Pollination Die in Airline Shipping