Hurricane Dorian has set its sights on the Southeast coast, with Florida likely to be the state that feels the biggest impact when it makes its U.S. landfall sometime over the weekend or early next week, according to forecasters.

Disaster preparations are in full swing in Florida as emergency responders, state officials and the insurance industry urge residents to get ready for what could be the first major hurricane of 2019.

“OIR’s Incident Management Team is fully activated and preparing for #HurricaneDorian,” the Florida Office of Insurance Regulation tweeted Thursday afternoon. “We will staff the Emergency Operations Center and stand prepared to support [Governor Ron DeSantis], @FLSERT [Florida Division of Emergency Management], and the State of Florida as we prepare for and respond to this storm.”

The storm’s track was still uncertain, the National Hurricane Center said Thursday in its 5:00 pm EST briefing, but Florida will definitely be impacted with an increasing likelihood of life-threatening storm surge along portions of the Florida east coast late this weekend or early next week.

NHC said the risk of devastating hurricane-force winds along the Florida east coast and peninsula late this weekend and early next week continues to increase, although it was still too soon for NHC to determine where the strongest winds will occur. The storm is projected be a Category 3 at landfall and winds could reach 130 mph, which is Category 4 status.

The uncertain track as of Thursday afternoon prompted the governor to expand the state of emergency he issued Wednesday from 26 to all 67 counties throughout Florida.

“All residents, especially those along the east coast, need to be prepared for possible impacts. As it increases strength, this storm has the potential to severely damage homes, businesses and buildings, which is why all Floridians should remain vigilant. Do not wait until it is too late to make a plan,” DeSantis said.

No evacuations had been ordered yet by the governor’s office as of Thursday.

CoreLogic estimated based on NHC’s Thursday 5:00 EST forecast that 668,052 homes with a combined $144.6 billion reconstruction cost value would be exposed to storm surge.

“Hurricane-driven storm surge can cause significant property damage when high winds and low pressure cause water to amass inside the storm, releasing a powerful rush over land when the hurricane moves onshore,” the catastrophe modeling company said. 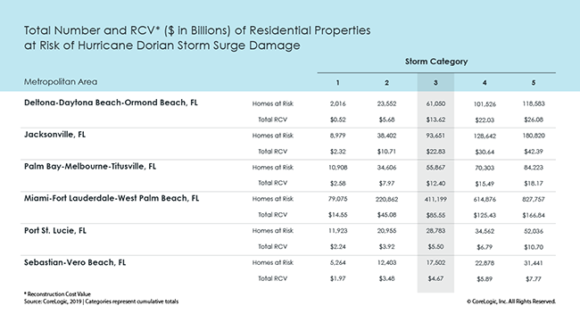 Florida Insurance Commissioner Altmaier in a statement Wednesday said OIR expects insurers to be “accessible and responsible before and after the storm,” and urged residents to prepare now.

Citizens Property Insurance Corp., Florida’s state-run insurer of last resort with nearly a half million policyholders in the state, said it is ramping up its own preparations to respond to claims and is ready to assist customers should Dorian make landfall over the Labor Day weekend.

“As Dorian approaches, our policyholders and all Florida residents need to take action to protect themselves and their families,” said Barry Gilway, Citizens president, CEO and executive director. “Be sure to follow instructions of local emergency management agencies. Citizens is preparing all of its internal and external resources to help you recover.”

Citizens features a Storm Tracker feed on its website that delivers real-time National Hurricane Center updates directly, and also offers storm preparation and response information through Facebook and Twitter at @citizens_fla. The insurer also partnered with the Florida Public Radio Emergency Network (FPREN) to bring the latest news about catastrophic weather impacting a policyholder’s area. FPREN updates can be heard on local public radio stations and by downloading their free Florida Storms app.

The state is also preparing residents to be on the lookout for fraud in the aftermath of Dorian. Florida CFO Jimmy Patronis said Thursday he had activated the Department of Financial Services Disaster Fraud Action Strike Team (DFAST), which will deploy to potentially impacted areas to help protect those recovering from storm-related fraud.

Patronis said the team was activated now to “help empower residents with information to fight fraud before the storm makes landfall.”

“Once the storm has passed, our teams will have boots on the ground to help protect Floridians during this vulnerable time,” he said.

Florida is familiar with hurricane warnings and predictions, having experienced four major storms over the last three years and many others throughout history. But there is still a sense of complacency among residents, says Lisa Lindsay, president of the Private Risk Management Association, an industry nonprofit focused on agents and risk management professionals in the high net worth private segment.

A PRMA survey conducted in June of 96 of its members representing 1,685 high net worth clients found that 86% of responding agents believe that less than 50% of their clients have a comprehensive hurricane preparedness plan.

Lindsay, who noted a high percentage of their membership are agents and brokers in the Florida and Southeast area, said these results are not surprising.

“We have a lot more work that we need to get done. Despite Florida’s history of hurricanes, people are slow to make changes to improve their situation,” she said. “We find that after a year of high hurricane activity there is a little bit of an uptick in people who purchased flood insurance, or they are more open to being proactive on risk management, but people will generally go back into that comfort mode, especially if they or someone they know hasn’t been impacted by any major activity.”

Right now, NHC models predict the majority of the state of Florida will be impacted by Dorian, including affluent areas like West Palm Beach and Miami. Lindsay said PRMA member agents are currently reaching out to clients and helping them prepare for being in the path of the hurricane, which includes helping them get people out to put up storm shutters, getting their evacuation plans in place, removing expensive artwork and car collections, and making sure their home inventories are up to date.

“That’s how a good plan works,” she said. “That’s why we as an association work with members to help educate clients to have this plan in place all year long – so we are ready for whatever may happen.”

A survey taken last spring of 400 Florida residents by national insurer AAA found while 92 percent of respondents were concerned about the 2019 hurricane season, most were not motivated to get ready for a major storm, with nearly a quarter of respondents reporting they had not made advanced preparations for hurricane season or severe weather. The survey also found that nearly 75% of respondents did not have flood insurance.

“A storm of this magnitude can create significant damage to your home, and endanger the people inside,” said Mark Jenkins, spokesman, AAA – The Auto Club Group, AAA’s Florida subsidiary, said in a statement Thursday. “It’s important to be prepared, because even if you do not face the brunt of the storm, peripheral winds and rain could knock out power for days. AAA urges people in the path of the storm to prepare their home, stock up on supplies, and follow the advice of law enforcement.”