Top winds for Hurricane Florence grew to 105 miles (169 kilometers) per hour as it pushed westward toward the U.S. East Coast, a major threat to homes, agriculture and the waning tourist season.

The storm’s winds grew by 35 miles-per-hour in the last 24 hours, and Florence is forecast to reach Category 4 status, one step short of the the most severe level, with 150 mile-per-hour winds by Wednesday. It is currently located about 625 miles southeast of Bermuda, the U.S. National Hurricane Center said in a 5 a.m. New York time advisory.

U.S. landfall could come Friday between Charleston, South Carolina and Norfolk, Virginia, the Hurricane Center said. If the strength continue to rise, Florence will be one of just three storms in the records to have winds of 150 miles-per-hour this far north, said Phil Klotzbach, a Colorado State University hurricane researcher. Storms in that part of the ocean usually veer away from the U.S.

“The track that Florence is taking is very atypical,” Klotzbach said in an email. “There’s just a really strong ridge building over the top of Florence that is going to drive it westward and also give it a remarkably favorable environment for strengthening.”

The governors of South Carolina, North Carolina and Virginia have declared emergencies. In addition to high wind and flooding rains, Florence could push a deadly surge of seawater on shore wherever it hits. About half of all hurricane deaths are caused by such a wall of water.

“There is an increasing risk of life-threatening impacts from Florence,” the hurricane center has been saying for days.

Should it strike in the Carolinas and Virginia, Florence could potentially cause $15 billion in damage, which would put it among the 12 costliest to hit the U.S., said Chuck Watson, a disaster modeler with Enki Research in Savannah, Georgia.

Agriculture could also be affected. North Carolina is the nation’s third-largest pork producer, according to data compiled by the National Pork Board. Smithfield Foods Inc., the No. 1 hog producer, and chicken producer Sanderson Farms Inc. saw their North Carolina operations disrupted in 2016 due to flooding from Hurricane Matthew.

The region is also a big supplier of the nation’s cotton, with North Carolina ranking ninth among states for the current 2018-19 crop year, South Carolina 11 and Virginia 16.

Some forecasts call for Florence to stall out after it strikes the coast. Still, the storm would produce flooding rains across a large part of the U.S. South, expanding the damage, according to Enki Research’s Watson.

“Very easy to get to $25 billion or more, especially with any northward wobbles, or curves that involve Virginia,” Watson said. “A big question on this track is how intense the storm remains over the Research Triangle area of North Carolina – Raleigh-Durham-Chapel Hill.” 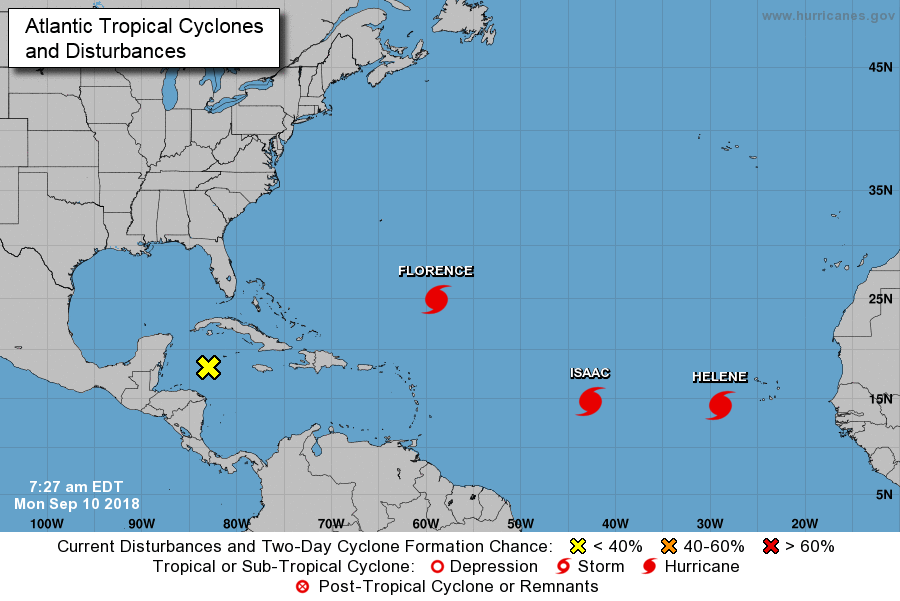 Further to the east, forecasters are also watching hurricanes Isaac and Helene. While Helene’s outlook calls for it to head into the open Atlantic, Isaac will probably hit the Caribbean’s Lesser Antilles Islands Thursday and potentially brush Puerto Rico, still recovering from last year’s Maria, as a strong tropical storm later.

In the Pacific, Tropical Storm Olivia is set to sweep through the Hawaiian islands Tuesday, where tropical storm watches have been posted. The island state is still recovering from Hurricane Lane, which brought flooding rains to many areas last month.