In a private waterfront resort on the northern tip of Key Largo, nestled between tropical forest and the Caribbean, Eric Soulavy is marketing luxury for the age of climate change: Coastal homes that are all but hurricane proof.

The Florida-based developer is finishing a three-story condominium project with overlapping defenses, a hydrological Fort Knox where prices start at $5 million for a four-bedroom apartment.

The 27 concrete-encased units are perched 13 feet above ground with windows that can withstand 174 mile-per-hour winds. Flood pumps in the parking garage can push 20,000 gallons of water per hour 65 feet underground, fueled by a generator so large it required its own building.

“I come from the luxury world,” Soulavy said on a recent afternoon, as he walked around the development in loafers and an exceedingly good tan. “When you’re dealing with these types of buyers, you can’t underestimate anything.”

Architects and engineers are devising increasingly effective protections against extreme weather — and not all of them as elaborate or costly as the Key Largo project. They’re designing homes that can deflect hurricane winds, rise with the flood waters and survive wildfires. But those innovations have been slow to spread, remaining largely the preserve of homeowners who are very wealthy, unusually safety conscious or just plain quirky.

“It absolutely has not happened fast enough,” Roy Wright, the former head of risk mitigation at the Federal Emergency Management Agency, said about the adoption of more storm-resistant building techniques. “We’ve got to take the things that work, and do a whole lot more of it.” 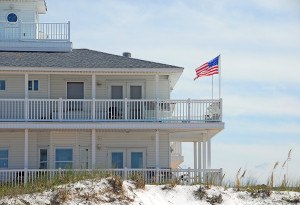 Even more basic advances have been slow to get adopted. The Insurance Institute for Business and Home Safety, an industry research group that Wright now heads, created a set of construction standards in 2008 called “Fortified,” which exceed the building code to certify at a minimum that a home’s roof won’t fly off or leak in a hurricane, regardless of its material.

“Developers say that the market isn’t asking for those things,” said Jeremy Gregory, a Massachusetts Institute of Technology civil and environmental engineering researcher and director of the school’s Concrete Sustainability Hub, dedicated to improving durability of buildings and infrastructure. “Part of that is people not being aware that these are the types of things they can ask for.”

Last year’s record hurricanes and wildfires demonstrated the vulnerability of the country’s housing stock, damaging or destroying more than half a million homes from California to Puerto Rico. Those disasters also showed that Americans won’t be deterred from building in vulnerable areas: Officials in Texas and California have already started issuing permits for new homes in the places hardest hit.

That leaves the design and construction of U.S. homes as one of the main factors determining the human and economic cost of climate change. In response, architects have come up with almost as many ideas as there are types of disasters to defend against.

For homes in floodplains, architects in Ontario have proposed “amphibious” structures that are secured to the ground, but float up and down on guideposts in a flood. Where the greatest threat is wildfire, Seattle architecture firm Olson Kundig has tried pairing non-combustible materials such as concrete, glass and steel with strategically placed exterior sprinklers.

Others have experimented with building shapes designed to deflect, rather than resist, hurricane-force winds. Deltec Homes Inc., a closely-held company in Asheville, North Carolina, builds houses with a distinctive circular shape and conical roof, which dissipate the force of the wind by routing it over and around the building.

Paul Dowsett, with the Toronto firm Sustainable.to, tries to protect residents against a different type of hazard: electricity outages that often follow a major disaster. He uses insulation and orientation relative to the sun to keep powerless homes warm in the winter and cool in the summer, allowing families to stay put.

Still others contend the way to protect homes against multiple hazards is to build them from concrete — and they don’t need to look like bomb shelters.

The home was constructed using insulating concrete form, which involves pouring concrete between stacked foam blocks. The resulting structure is far stronger than a typical wood frame, and about 15 percent more expensive, Azaroff said. Once the walls are covered with siding outside and gypsum board inside, it’s almost impossible to tell the difference.

“Any new ways of doing things take a long time to adopt,” Azaroff said. “There is a trepidation for the unknown.”

That aversion to change is especially true for the home-building industry. In a report last year, the McKinsey Global Institute found that while labor productivity in most parts of the economy has increased at least ten-fold since the 1950s, “the productivity of construction remains stuck at the same level as 80 years ago.” Single-family construction ranks near the bottom of the construction industry on that score.

Chris Toomey, McKinsey’s vice president for major projects and an expert on infrastructure and real estate, said the housing industry is fragmented among small companies and contractors, which slows the rate at which new techniques get adopted.

Incentives also play a role. A study released by the federal government in January found that exceeding local building codes has long-term financial benefits for the owners and residents of those homes, as well as the communities they’re in and even the banks that finance their mortgages.

The people that benefit the least, however, are developers, who “usually sell the new buildings after they are completed.”

The federal government has tried to push builders to adopt tougher standards. FEMA offers lower flood insurance premiums to communities that go beyond local building codes, and requires projects it funds to use the latest national model codes. But the agency said in a statement that building standards are primarily a local responsibility.

Insurers, which faced more than five million claims from last year’s disasters, are trying to spur tougher standards through the Fortified designation. Wright, the former FEMA official who runs the institute, said it costs about $1,000 more, on average, to build a roof that will meet the group’s minimum standards. That amounts to 0.3 percent of the average cost of a new home last year.

Wright said his group has been working with local governments, roofing companies and builders to convince them to build to higher standards. And he said last year’s hurricanes helped bring homeowners around.

“There is a tipping point where people understand the disruptive nature of a storm on the life of their family,” Wright said. “It only takes one storm.”