The picturesque Florida cities of Miami Beach and Sarasota carry high investment-grade credit ratings and are popular travel destinations. They’re also two of the most exposed U.S cities to climate change in the country, according to a new analysis by advisory firm Four Twenty Seven. 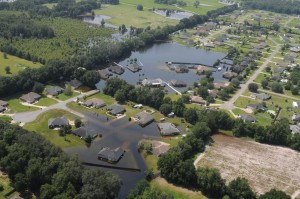 The Berkeley, California-based firm has developed an index surveying 761 cities’ and 3,143 counties’ exposure to sea level rise, water stress, heat stress, cyclones and extreme rainfall based on analysis of changes between current and future conditions. It found that communities in Florida are the most susceptible to climate change risks, with Miami Beach being the most exposed city and Manatee County being the most-exposed county.

The $3.9 trillion municipal-bond market has been slow to take climate change risks seriously, said Nicholas Erickson, assistant vice president of portfolio management at Sage Advisory Services. But the hurricanes that battered Florida, Texas and Puerto Rico last year show how significant weather-related events could be for local economies, he said.

“It could have a huge impact,” he said.

Investors have pushed credit-ratings companies to give them more of a warning about environmental risks. Moody’s Investors Service and S&P Global Ratings say they incorporate environmental risks in their ratings through their analysis of factors such as leaders’ preparedness for weather events. Even so, rating methodologies for states, local governments and utilities don’t “explicitly” address climate change as a credit risk, Moody’s said in a report last year.

For Florida cities and counties, home values could suffer as a result of the risks of cyclones and flooding, which could in turn hurt property-tax revenue that governments rely on, the Four Twenty Seven report said. In order to address water shortages or droughts, water utilities may have to spend more on infrastructure or their customers may have to pay more in fees, it added.

Charleston, South Carolina, and Virginia Beach, Virginia, topped the ranking for cities susceptible to severe hurricanes and typhoons in the future. Heat stress, which measures the frequency and severity of hot days and average temperature, was found to predominantly affect the Southeast and Midwest.

Freitas said he hopes the firm’s findings don’t cause investors to avoid investing in projects out of the most exposed places to climate change. “Understanding risk is the first step toward helping people invest in resilience as well,” he said.