A U.S. lawmaker wants the Homeland Security Department inspector general to review contracts worth $30 million awarded to a fledgling company for Hurricane Maria disaster supplies it failed to deliver to Puerto Rico.

Rep. Sean Maloney, D-N.Y., asked for the review in an amendment to the Disaster Recovery Reform Act of 2017 during a meeting of the Transportation and Infrastructure Committee. He cited reporting by The Associated Press this week that the Federal Emergency Management Agency awarded contracts for tarps and plastic sheeting to Bronze Star LLC of St. Cloud, Florida, that were never delivered. The agency ultimately terminated the contracts earlier this month without paying any money, but the episode caused a delay of four weeks.

“We still haven’t got that job done, because now seven weeks have elapsed,” Maloney told the committee. “Meanwhile, in Puerto Rico, tens of thousands of families are exposed to the elements at the worst time of year. It’s completely unacceptable, and it cries out for a professional and independent review of the inspector general of the Department of Homeland Security.” 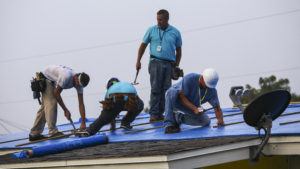 It is not clear how thoroughly FEMA investigated Bronze Star or its ability to fulfill the contracts. Formed by two brothers in August, Bronze Star had never before won a government contract or delivered tarps or plastic sheeting. The address listed for the business is a single-family home in a residential subdivision.

Though both the brothers are veterans, neither was awarded a Bronze Star, a medal earned by service members who serve heroically in combat.

FEMA awarded the company two contracts Oct. 10 to provide 500,000 tarps and 60,000 rolls of plastic sheeting. More than a half dozen others also bid, but FEMA said it could not provide details about their identity or their bids.

After the AP’s story ran, FEMA said a second company, “Master Group,” was the second-lowest and technically acceptable bidder and was ultimately awarded the tarp contract.

The agency provided no additional details on Master Group or a copy of the award, which was not listed in federal data. A man who identified himself as the CEO of The Master Group, with offices in England and Los Angeles, answered what appeared to be his cell phone and said he was in Europe, then hung up.

He did not respond to an email inquiry.

Maloney’s amendment cleared the committee with unanimous bipartisan support, though it was unclear when the House will vote on the measure.

The amendment specifically requests an inspector general audit of all contracts awarded for tarps and plastic sheeting for the U.S. territories of Puerto Rico and the Virgin Islands. The review would include the contracting process used to evaluate bidders and award the contracts; the assessment of past performance and technical capacity to fulfill the contracts; and how FEMA ensures the contractors meet the terms.

The audit would also include a review of whether the failure of contractors to meet the terms affected the provision of tarps and plastic sheeting to these areas.