Early this morning, Hurricane Matthew was nearing the eastern tip of Cuba, according to the National Hurricane Center (NHC). Maximum sustained winds were recorded at nearly 125 mph (205 km/h) with gusts reportedly higher. It is considered a category 3 hurricane on the Saffir-Simpson Hurricane Wind Scale.

Cat modeling firm RMS noted that it is one of the most powerful North Atlantic hurricanes in recent history, having briefly reached Category 5 strength on Saturday October 1, it is the strongest hurricane in the Caribbean Sea since Felix in 2007. 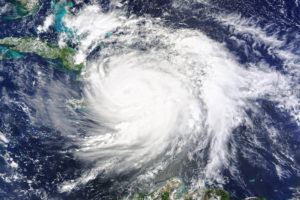 Slight strengthening is forecast during the next couple of days.

A Hurricane Warning is in effect for the east Florida coastline from north of Golden Beach to Sebastian Inlet, including Lake Okeechobee.

A Hurricane Watch is in effect along the east coast of Florida north of Sebastian Inlet to the Fernandina Beach.

A Tropical Storm Warning is in effect along the east coast of Florida from Chokoloskee to Golden Beach and in the Florida Keys from Seven Mile Bridge eastward, including Florida Bay.

Interests elsewhere in the Florida Peninsula and the Florida Keys should monitor the progress of Matthew.

According to the NHC, Matthew is likely to produce devastating impacts from storm surge, extreme winds, heavy rains, flash floods and/or mudslides in portions of the warning areas in Haiti, Cuba and the Bahamas.

It will likely take another day or so for the potential impacts of Matthew in the United States to clarify, the NHC stated on its Facebook page. Tropical storm or hurricane conditions could affect Georgia, South Carolina and North Carolina later this week or this weekend, even if the center of Matthew remains offshore.

Keith Tidball, an expert in emergency response at Cornell University, said Matthew is likely is likely to continue its westward shift towards North Carolina, New England and Eastern Massachusetts.

“After its approach among southeastern seaboard states, Matthew is predicted to continue north-northeast and strike New England on Sunday, with eastern Massachusetts being potentially at greatest risk. It is unclear if landfall in the Northeast will be at hurricane strength, due to the potential for Matthew to pass over a lot of land before getting there,” said Tidball.