The “Class Action” has seen better days but none appear recent.

The modified Alaskan-style trawler epitomizes the definition of a vessel at risk of becoming derelict, its weather-beaten deck is scant inches above the lapping waves of the Ortega River and the wood of its cabin rots away like some maritime corpse in an atmosphere of decay.

The partially sunken wooden-hull vessel isn’t the only one deteriorating on Jacksonville , Fla., waterways.

Anchored together in the Trout River, a pair of shrimp boats list to one side like drunks trying to hold each other upright.

An unknown number of vessels – either declared derelict or at risk of becoming derelict – litter Northeast Florida waters as well as those statewide.

However, a new state law promises to make it easier for city and county authorities as well as the Florida Fish and Wildlife Conservation Commission to intervene more decisively before a vessel becomes derelict. It’s intended to save taxpayers money, eliminate navigation hazards and reduce the potential for environmental damage caused by leaking fuel, oil or even sewage from the vessel’s waste tank.

“This new law is a great big plus to being able to work with vessels before they actually become derelict. And that’s a goal that we’ve had locally with the help of FWC officers as well as the Jacksonville Sheriff’s Office .,” said Capt. Jim Suber, the waterways coordinator and dockmaster for the city of Jacksonville. Suber previously served almost 32 years with the Sheriff’s Office Marine Unit.

“Just like every waterway in the state, we have derelict vessels that go down every once and a while. Between the Sheriff’s Office, the FWC officers and our resources, we’re usually able to resolve the issue before it becomes an extreme issue,” Suber said. The new law allows law enforcement agencies to take action regarding the owner of the vessel before it sinks, breaks apart scattering debris or the vessel becomes adrift posing a threat to other vessels, he said.

Enacted July 1, the measure allows law enforcement officers to issue non-criminal citations to owners who allow their boats to deteriorate to the point of being “at-risk” of becoming derelict. Applying to recreational as well as commercial vessels, the law provides for civil fines to be imposed on the owners of at-risk vessels. 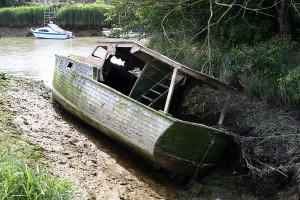 “This law allows officers to take action before a vessel crosses that line between at-risk and derelict, and hopefully prompts the owner to rectify any issues with the vessel before it reaches a state of disrepair,” said Phil Horning, derelict vessel program administrator for the state Fish and Wildlife Commission.

“Prior to this law being enacted, officers had to wait until a vessel met the legal criteria for a derelict vessel before beginning any sort of official interaction with the owner,” Horning said.

The new law defines an at-risk vessel as one deemed on the brink of becoming derelict. It lists multiple factors, including a vessel that is taking on or has taken on water without an effective means to get the water out of it. Other factors include a vessel that is left or stored aground unattended in a condition preventing it from getting underway, is listing due to water intrusion, is sunk or partially sunk, according to the law.

“Our goal is to keep Florida’s waterways safe and protect their environmental stability,” Horning said.

Fish and Wildlife Commission officials as well as Northeast Florida law enforcement officials expect the law to decrease the number of vessels becoming derelict – an ongoing problem that fluctuates statewide.

“We’re probably worse than some counties but not as bad as others,” said Suber, noting Duval County hasn’t experienced as bad of a derelict vessel problem as elsewhere in Florida.

He said several years ago, a portion of a Fish and Wildlife Commission grant from the state Legislature was used to clear out numerous derelict vessels in Duval County. Since then, local and state law enforcement authorities have done a good job dealing with derelict vessels after they are discovered in county waterways, Suber said.

Suber said the “Class Action” recently sank despite its owner’s efforts to repair it. The state is amidst the process of declaring it derelict, The two shrimp boats have been in the Trout River about five years as the result of a legal battle with the owner, he said.

Ranging from canoes, bass boats and sail boats up to shrimp boats and large commercial ships, Florida is home to a lot of vessels.

A total of 896,466 vessels statewide were registered as of Wednesday, according to the Florida Department of Highway Safety and Motor Vehicles. By state law, all recreational and commercial vessels home ported in Florida must be registered with the agency.

Some vessels are abandoned, including many sunken or partially sunken in state waters. However, the exact number of derelict and at-risk vessels is unknown.

The state Fish and Wildlife Conservation Commission maintains the statewide derelict vessel database. However, reporting derelict vessels is voluntary. Fifty-nine other agencies statewide voluntarily can enter derelict vessels to the database, but are not required to do it. So,”`basically it’s a living system and the numbers are changing daily,” said Carol Lyn Parrish, a FWC spokeswoman.

“As of right now, we have in our database 377 active cases statewide of derelict vessels,” Parrish said. Those cases range from recreational to commercials vessels from 2009 through 2016.

Removing derelict vessels can be costly.

It costs an average of $350 to $450 per foot of vessel length. The cost varies depending on factors, including whether the derelict vessel is sunken.

Local governments spent a total of about $325,000 to remove 92 known derelict vessels in 2013, according to the At-Risk Vessel statewide data base, which was the most recent information cited in the analysis. That works out to be an average of $3,533 per vessel.

However, a floating vessel can be towed to a boat ramp or hoist then pulled from the water at a lower cost. Relocating a floating vessel might cost nothing if a law enforcement officer is able to tow the derelict to a suitable location. If towing services are used, it typically can cost about $200 an hour with a one-hour minimum charge, beginning when the tow boat leaves the dock to the time it returns, according to the analysis.

Florida legislators appropriated $1.4 in the recent session for state grants to help counties and cities pay for removal of derelict vessels posing a navigation hazard. It’s a non-recurring allocation. State, county and municipal government entities must apply for one of the derelict vessel removal grants, which will be distributed by the Fish and Wildlife Commission, Parrish said.

The commission as an agency doesn’t directly remove the derelict vessels. It will try to locate the owner, or it turn the case over to the local city or county to get the vessel removed. It can take time to track down the vessel owner, if at all. Then money often becomes an issue of how fast it can be removed, Parrish said.

Parrish said officials anticipate starting the grant application process at the beginning of September. It will run anywhere from 30 days to six weeks. Depending on how many applications are received, there is a possibility that a city or county might not receive all the grant money it applied to get, she said.

In 2013, several derelict vessels were removed from the St. Johns River near Green Cove Springs in a major clean-up effort involving the Clay Sheriff’s Office Marine Unit, FWC officers and state Department of Environmental Protection. Since then, they’ve worked hard to stay on top of the problem, and maybe or one or two derelict vessels are occasionally found, Deputy Chris Castelli said.

Castelli said he probably investigates about three derelict vessel cases a year, “but when we first started it was a massive undertaking.

“The main point I want to get across to people is think about what you’re buying before you buy it,” Castelli said. “Do you have adequate funds to take care of it? Or if you receive a vessel as a gift and you have dreams of fixing it up but then you’re situation changes and then you’ve got real problems.”