The death of a longtime Braves season-ticket holder raises questions about the planned height of guardrails at their new stadium scheduled to open in 2017.

The Braves say they had safety in mind when making plans for SunTrust Park even before Gregory K. Murrey’s death on Saturday night, though team officials on Monday would not release plans for the heights of the railings at the new stadium.

The stadium rails at Turner Field meet industry standard height requirements, but the team could exceed those heights at their new facility. 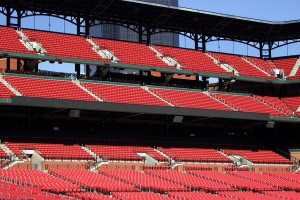 The International Building Code, the accepted industry standard, has a minimum height requirement of 42 inches for guardrails that act as protective barriers in open-sided areas such as walkways or smoking platforms. Railings in front of seated areas must be 26 inches.

Braves president John Schuerholz didn’t address specifics on Sunday about guardrails at the new stadium, though he did say that while Murrey’s death was tragic it wouldn’t influence construction plans.

“We’re not going to tie that into how you design a facility,” Schuerholz said. “It was a sad, tragic event. We obviously abide by industry regulations and we’ll continue to do that. That’s what we’ll do.

“We made our plans long before this event occurred. Every facility that’s getting built, there’s a great deal of communication with architects and engineers and the league in terms of abiding by league standards for the industry. We certainly will do that.”

There is a precedent for a team raising the height of its stadium rails following a fan death.

At the Texas Rangers’ facility in Arlington, Texas, higher railings were installed in 2012, one year after Shannon Stone, a firefighter attending a game with his 6-year-old son, fell about 20 feet after reaching out for a foul ball tossed into the stands. The Rangers raised those railings from 33 inches to 42 inches, at a cost of $1.1 million.

Murrey’s death was the third in eight years at Turner Field. In 2013, a fan’s death was ruled a suicide. In 2008, police cited alcohol as a factor after a man died.

Murrey, 60, of Alpharetta, Georgia, was pronounced dead at Grady Memorial Hospital following his fall in the seventh inning of the Braves-Yankees game.

The Fulton County medical examiner on Monday ruled the death was an accident caused by blunt force injuries to his head and torso. The medical examiner said toxicology results will not be available for several weeks.

Murrey’s family on Monday asked for privacy as it grieves.

“He dearly loved his family, Atlanta, and the Atlanta Braves,” the family said in a statement. Murrey held season tickets for 23 years. “The night Greg passed away, he was doing one of his favorite things – watching the Braves.”

The minimum height standards for guardrails have raised questions on whether they are sufficient, especially for taller fans. A 26-inch rail at the bottom of a section of upper-level seats would not reach the waistline of a fan over 6 feet tall.

It seems highly unlikely similar changes would be considered for Turner Field, which has only one more year as the home of the Braves. But there would be ample time to adjust plans, if necessary, for the new park.

Beth Marshall, Braves senior director of public relations, said Monday team officials would have no further comment “in light of the active investigation” into Murrey’s death.

Schuerholz said Sunday his focus was on Murrey’s family and players’ families and friends who were seated in the lower-level seats where he fell to his death. Schuerholz said the safety of fans is always a priority.