Florida hasn’t been hit by a hurricane since 2005, the longest stretch in more than a century. Its state-run property insurer isn’t taking any chances.

Even though forecasters predict this year will produce the fewest named Atlantic storms since 1997, Citizens Property Insurance Corp., which provides coverage when other insurers won’t take the risk, is selling as much as $1 billion of municipal debt to raise cash just in case. It would be the insurer’s first bond sale in three years.

With hurricane season set to start June 1, Citizens is taking advantage of interest rates close to generational lows to bolster its claim-paying ability. Investors in the insurer’s tax-exempt bonds welcome the steps toward a sturdier balance sheet: One storm is all it takes to rack up billions of dollars of expenses.

“I’m not sure they can predict what’s going to happen with the weather,” said Justin Land, director of tax-exempt management in Naples, Florida, at Wasmer, Schroeder & Co., which oversees about $5.3 billion. “Money is so cheap this is a good time to finance their pre-event capital.”

Wilma was the last hurricane to strike the state, in October 2005. It killed five people in Florida and caused $20.6 billion of damage, according to a National Hurricane Center report. The state hasn’t gone this long without a hurricane in records going back to 1851, NHC data show. 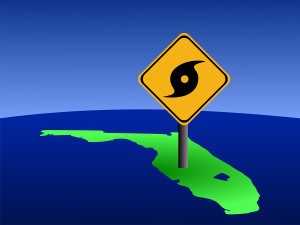 In its last bond sale in 2012, Citizens told investors that it writes policies in areas that “appear to be at the highest risk” of hurricanes and sinkholes, according to offering statements. If a storm produces enough claims to consume reserves, Citizens can ask for a surcharge on property-insurance policies sold statewide, including those from other companies, to repay its bonds. One risk is that regulators don’t grant the surcharge.

The exposure to the weather can generate higher yields for investors. In the 2012 tax-exempt sale, 10-year Citizens bonds priced to yield 3.77 percent, or about 1.8 percentage points above benchmark securities, data compiled by Bloomberg show. The bonds carry an A+ grade from Standard & Poor’s, the fifth- highest level.

“They tend to trade a little wider based on Florida’s location and the potential that they could get a hurricane or two,” said Paul Brennan, a money manager in Chicago for Nuveen Asset Management LLC, which owns Citizens bonds among its approximately $100 billion of munis. “It’s only a matter of time before they get another hurricane.”

This year, partly because of cooler Atlantic waters, Colorado State University researchers predict seven named storms, compared with the 30-year average of 12, with three reaching hurricane strength of at least 74 miles (119 kilometers) per hour. The season lasts through Nov. 30.

The insurer still needs cash for possible claims, in part because it plans to pay off about $2.6 billion of debt, most of which matures within three years.

Most of the deal will be tax-exempt and fixed-rate, maturing in three to 10 years, Jennifer Montero, the chief financial officer, said in an interview. It will probably price next month, she said.

“This allows us to take advantage of the yield curve and lock in rates at historically low rate levels,” she said.

The insurer determines reserve levels based on expected losses from a storm that has a one-in-100 chance of happening.

The lack of storms has drawn competition from other insurers, reducing residents’ reliance on Citizens, which has been trying to move customers off its books to reduce risk.

With storms bypassing the state, the company earned net income of more than $1 billion the past two years, raising its surplus to $7.4 billion at year-end, compared with a deficit of $1.8 billion at the end of 2005, according to financial statements.

With less potential for claims, the planned bond sale is about a third smaller than in 2012.
The bonds are “a very acceptable risk,” said Land at Wasmer, Schroeder. The company owns Citizens debt and will consider the new bonds.

(With assistance from Brian K. Sullivan in Boston.)