“It was a buck, and he came out of nowhere,” Brown said of the November accident that happened at dusk. He was uninjured, but his Toyota Tundra pickup received heavy damage.

Deer-vehicle crashes spike in the fall, across the country and across the state, federal highway safety data and insurance company research shows. From October through December, the animals are on the move as breeding season kicks in. The time also coincides with hunting season, so pressure has deer roaming around. In 2013, there were 2,167 deer-vehicle crashes in Alabama, resulting in 180 injuries and one fatality, figures from the Alabama Law Enforcement Agency show.

On Nov. 10, a Perry County man was killed when his pickup struck a deer on Alabama 14 about three miles south of Greensboro, state trooper reports show. Willie Jackson, 59, died when his 1979 Chevrolet left the roadway and overturned. He was not wearing a seat belt.

According to the National Highway Traffic Safety Administration’s website, on average, about 1 million animal-vehicle crashes occur each year, resulting in 200 deaths, 10,000 injuries and more than $1 billion in vehicle damage.

The stats don’t specify the animal involved in the crashes, but data shows deer are most commonly struck, said Russ Rader, senior vice president for communications with the Insurance Institute for Highway Safety.

And the likelihood of the crashes is up this year, according to a study conducted by State Farm.

For the eighth year in a row, West Virginia tops the list of states where a collision is most likely to occur. The odds a driver in the Mountain State will collide with a deer are 1 in 39, a nearly 5 percent increase from 2013, the State Farm report shows. Pennsylvania, Montana, Iowa and South Dakota round out the top five states where the crashes are most likely to occur.

Hawaii rounds out the bottom of the list, also for the eighth year in a row, with odds of 1 in 10,281. Hawaiians are three times more likely to get struck by lightning during their lifetime than they are to hit a deer in the next year, the report says.

Alabama has gone up slightly on the list since last year, from No. 20 to No. 19. There is a 1-in-127 chance of drivers hitting deer in Alabama, up about 4 percent from last year, the report shows. 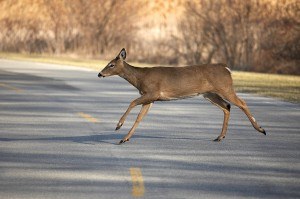 “Periods of daily high-deer movement around dawn and dusk, as well as seasonal behavior patterns, such as during the October-December breeding season, increase the risk for auto-deer collisions,” said Ron Regan, executive director of the national Association of Fish & Wildlife Agencies. “Changes in collision rates from year to year are a reflection of changing deer densities or population levels – more deer in a given area increases the potential for collision. Deer populations are also affected by conditions such as new or improved roads with higher speeds near deer habitat, changes to hunting seasons to manage wildlife, winter conditions and other related factors.”

There are plenty of opportunities to hit deer in Alabama. Estimates from the Alabama Department of Conservation and Natural Resources put the state’s deer herd at between 1.5 and 1.7 million animals.

And it’s not just in the boondocks where you have to be careful.

“I see deer all the time in town – Fairview Avenue, Memorial Drive,” Brown said. “Driving the interstate to and from Montgomery at night or early in the morning, you always see deer.”

Dawn and dusk are the times deer are most active, said Sgt. Steve Jarrett, spokesman for the Alabama state troopers. The best way to prevent a collision? Slow down and buckle up, he said.

And what may seem strange advice: Hit the deer.

“If you suddenly have a deer before your car, brake firmly – do not swerve and leave your lane,” Brown said. “Many accidents are not due to colliding with the deer but are the result of driving into another car or truck in the opposite lane while trying to avoid the animal.”