Business isn’t buying the Alabama Supreme Court’s attempt to limit the fallout from its decision saying brand-name drugmakers can be held liable for warnings on generic medication produced by other companies.

A majority of justices signed off on an opinion that went to lengths last week to say the ruling shouldn’t be felt outside of the pharmaceutical industry, and lawyers for the south Alabama couple who sued over a generic medication agree the decision will have a limited impact.

But critics of the decision say the all-Republican court, despite a reputation for being friendly to business, has set the stage for what could be a flood of innovative lawsuits trying to hold companies responsible for actions taken by others.

“They claim it’s not an expansion of tort laws, but it really is,” retired attorney Richard Garrett, a senior fellow with the conservative Alabama Policy Institute, said in an interview Friday.

In a court document, the U.S. Chamber of Commerce argued that the position adopted by the court would have far-reaching impact.

“The court’s answer threatens to unleash the plaintiff bar’s most creative and damaging suits on all businesses in Alabama – particularly those in Alabama’s burgeoning automotive, aerospace, and health care industries,” the organization argued in a brief.

Plaintiff’s lawyers disagreed just as strongly about the case, which has been watched closely nationally.

“I think they went to all sorts of efforts in this decision to say this applies to the pharmaceutical industry,” said Lewis Garrison of Birmingham, who with Chris Hood represents the couple at the center of the dispute, Danny and Vicki Weeks.

The Weeks filed a federal lawsuit against five current and former drugmakers for injuries the man allegedly suffered from the long-term use of the prescription drug metoclopramide, which is the generic form of the brand-name drug Reglan. The main defendants are Wyeth Inc., owned by Pfizer, and Schwarz Pharma Inc.

The drug is typically used to treat heartburn and nausea, but suit claims the medication left the man with involuntary muscle movements similar to Parkinson’s disease.

The couple’s suit, filed in federal court in Montgomery, claims warning information included with the generic drug failed to adequately describe possible hazards, including the potential for involuntary muscle movements, which should have been disclosed to Weeks’ physician. That warning label, like others included with generic medications, used information first produced by the brand-name manufacturer. 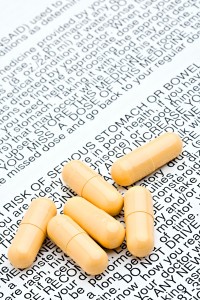 The federal judge asked the Alabama Supreme Court to clarify Alabama law on whether a brand-name manufacturer could be held responsible for fraud or misrepresentation in a case involving generic drugs, leading to a review by the justices. First in 2013 and again in a 6-3 decision issued Aug. 15, the court said the brand-name maker could be held liable.

The Business Council of Alabama, an influential lobby in Alabama’s GOP-controlled Statehouse, said it wants the Legislature to “correct” the law. Of about 100 courts nationwide that have considered the same question posed to the justices, only three others have ruled like the Alabama court, the council said.

“Allowing brand-name manufacturers to be held liable for harms allegedly caused by their competitors’ products has the potential to once again make Alabama a hotbed for litigation and threatens the state’s economy,” the organization said in a statement.

Legislative action aside, pharmaceutical makers lack a direct line of appeal in the case and the Weeks’ lawsuit is now back before a federal court. It’s one of a few thousand cases filed nationwide involving the generic form of Reglan.

“Despite all the whining by the drug industry this is also an important decision for doctors because, at the end of the day, doctors need to know what the dangers of drugs are when they are prescribing them,” he said.