“It’s an unfortunate situation to cause it to come about, but this is going to be a very nice facility,” Hollingsworth said. “Being a rural community, there’s no way we could afford something like this without federal funding. It’s a rare occasion.”

Hackleburg in northwest Alabama was one of the hardest hit towns when a series of tornadoes struck Alabama on April 27, 2011, killing more than 250 people across the state. 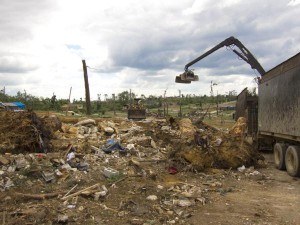 Hollingsworth said he hopes students and faculty can move into the new school in the fall.

“We won’t be in it when the new school year starts because there’s still a lot to be done,” Hollingsworth said. “Hopefully, we’ll be in it the middle of fall.”

The school’s athletic facilities are finished and the school will be able to play home football games.

“That’s going to be a bright spot,” Hollingsworth said. “It will be a big deal for the community to get that back.”

“We’re excited about getting some ballgames back in Hackleburg,” Hardin said. “The community is ready. We’re thankful that Hamilton and Phillips let us use their facilities last fall, but we’re glad to be back at home.”

Hardin said the facility will be two stories, one for the high school and one for the elementary. The K-12 school has about 520 students.

“Everything is going to be under one roof,” Hardin said. “The gyms are inside the building and so is the cafeteria.

“The only thing they’ll have to go outside for is the outside athletic facilities.”

Hardin said the students and faculty have been very flexible in spending the past three years in modular units.

“It was kind of unique at first, but now they’re ready to get out of the trailers,” Hardin said. “Everyone is excited, and they’re working hard to get us into the new building.”

Hardin said the new school building is much bigger than the students and faculty are accustomed to using.

The new school sits on a hill behind where the old school used to be. Hollingsworth said the school will feature all the latest technology.

“The elementary and high school students will both share the library and cafeteria, but we will have separate gymnasiums.”

Hollingsworth said it will be nice to have the school in one primary facility.

“Even before the storm, we had about 15 buildings,” he said. “Now, everyone will be under one roof.”
Hollingsworth said the construction of the school has proven the perseverance of the Hackleburg community.

“The entire community has been resilient,” Hollingsworth said. “The kids get that from their parents, and it has caused us all to pull together.”

Hollingsworth said when the new school opens, the only thing remaining from the previous site will be a portion of the concrete bleachers on the football field.

“The lights came down on part of the bleachers, so they had to be repaired,” Hollingsworth said. “The football field will be in the same location, but we’ve turned the baseball and softball fields around a little bit.”

Hollingsworth said the first home football game will be special.

“This fall will be a special time,” Hollingsworth said. “Compared to where we’ve been and just to see the difference now, everything seems real fresh and exciting.”

Hardin said the school’s senior class is excited about being the first to graduate from the new school.

“We hate that our recent senior classes didn’t have the chance to graduate from the new building, but the new class is chomping at the bit to get into it.”