A Senate committee unanimously approved a bill that would provide safety guidelines for parasailing companies after hearing tearful testimonies from a 17-year-old who suffered a brain injury and broken bones in her spine and from a mother whose daughter died while doing the recreational sport.

The legislation approved Thursday details specific insurance, equipment and license requirements, along with weather conditions that dictate a halt in operation in Florida.

Sen. Maria Sachs sponsored the bill. The Delray Beach Democrat says it’s her No. 1 priority for this year’s session.

“If I fail, then people can be injured or killed,” Sachs said. “We’re tired of these types of injuries that could have been prevented if, in fact, those operators had followed the minimum requirements of not going out when there’s a lightning storm or if there are wind gusts over 20 mph.” 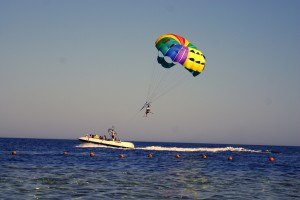 The parasailing industry received national attention in recent years with several deaths and accidents involving the unregulated activity in Florida.

In parasailing, people wear parachutes and are lifted into the air when a motor boat pulls on the tow rope they are attached to.

The bill proposes that operators carry $1 million in insurance, have a license issued by the U.S. Coast Guard and have certain equipment on the boat.

Alexis Fairchild, who suffered the brain injury, and the mother of Amber White, who died in the 2007, made pleas through tears to the committee. White’s sister Crystal, who was also injured in the accident, was scheduled to speak, but became too emotional to address committee members.

Fairchild and a friend slammed into a condominium, hit a power line and struck a parked car in 2013. She had to relearn basic motor skills and was forced to drop out of her normal Indiana high school. Fairchild had to wear a helmet and back brace at her new school.

White and her sister smashed into the roof of a two-story home after the rope attached to the boat broke in 2007. They were then pulled into a tree.

Kathleen Miskell died after her parasail harness broke and she plummeted as much as 200 feet into the Atlantic Ocean in 2012.

“It’s my senior year and it’s been flipped,” Fairchild told the committee. “I should be out doing senior things, making memories, going on spring break. I spend my time at home or at doctor appointments. That’s not how I pictured it. I can’t go to regular school because it’s not safe.”

She said after the meeting, “How many other people need to be hurt or even killed before this passes? When is it enough?”

Sachs said she has the support of the Parasail Safety Council, Florida Fish and Wildlife Conservation Commission, Water Sports Industry Association, though not 100 percent of the industry backs the legislation. Two previous bills regulating parasailing did not pass.