Gary Vaughn was mentally ill and homeless, but neighbors on Humber Street in South , Tenn., had known him for years and took care of him. On the evening of Sept. 28, they saw smoke and flames erupting from the abandoned house where he stayed. Several people rushed toward the house and found he was trapped inside.

Neighbor Yolanda Spates heard him shouting from within: “Help me! Help me!” Then she heard him grunt, and go silent.

Another neighbor, Clemente “Mente” Butts, says he ran to the burning house and ripped a sheet of plywood off a window, only to find another sheet behind it. While other neighbors worked frantically, Butts ran back to his own house for tools. Another neighbor managed to pull a door open, Butts said, and firefighters arrived, raced inside and brought Vaughn out.

Vaughn was unconscious and died later at The Med from smoke inhalation, the fire department said.

While his death illustrates the horrific power of house fires, fatalities resulting from them are increasingly rare. Across the nation, fire deaths have dropped sharply in recent decades. Vaughn’s death brought the number of fire fatalities in Memphis this year to three.

Benson attributes this year’s low numbers to better fire prevention education, warm weather that stopped people from using dangerous heating devices in their homes, and the department’s distribution of smoke detectors – a total of 2,255 installed during the first nine months of this year alone. 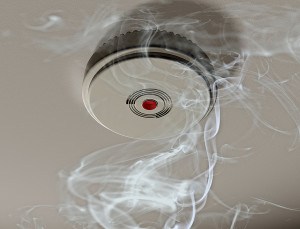 Benson said budget problems kept the fire department in the news, which helped draw attention to fire safety. He said luck played a role, too, and he recognized the possibility that a calamity in the coming months could ruin the chance of setting a record.

Even if that happens, though, the low number of fire deaths in Memphis is more than a statistical accident. The number of home fire deaths nationwide dropped from 5,865 in 1977 to 2,380 in 2012, said John Hall, division director of fire analysis and research at the nonprofit National Fire Protection Association. Reported fires and nonfatal injuries have dropped, too.

One big reason: the rapid adoption of smoke detectors, electronic devices that alert sleeping people to fire. In the early 1970s, perhaps 5 percent of homes had smoke alarms. Today, around 95 percent do, he said. He said other factors contribute to safety. Laws require tobacco companies to produce cigarettes that are less likely to cause accidental fires. Some new construction codes require safety measures such as sprinkler systems.

Poor people are more likely to work long hours and juggle child care, creating more opportunities for a fire to start with no one catching it, he said. Their homes may be full of old products built to lower safety standards. And in rural areas, response times are longer.

African-Americans and American Indians are more likely than other groups to die in fires, and fire deaths are also associated with low educational levels and smoking, according to Hall’s research.

The three men killed in house fires in Memphis this year were Dwight D. Seay, a 57-year-old who died May 16; 53-year-old Andre Peoples, who died May 20, and Vaughn, 42, who died following the September fire.

Vaughn had struggled with mental illness for years, said his nephew Tony Downey, 46. He had no health insurance to pay for treatment, and Downey said that when family members tried to take him to mental health centers, he’d leave. Downey said his uncle sometimes stayed with him and other family members, but kept going back to abandoned houses on Humber Street, where he grew up.

He’d stand on street corners or visit neighbors. They gave him small gifts, including food, money and blankets. He smoked, and Downey said a firefighter told his sister that a cigarette started the fire. Fire department spokesman Wayne Cooke said the cause is still under investigation.