God is a mighty fortress, the old hymn goes, and the same could be said for Romar Beach Baptist Church.

With concrete walls more than a foot thick and pilings driven deep into bedrock, the waterfront church just yards from the Gulf of Mexico is built to withstand a Category 5 hurricane with winds of 157 mph and higher. 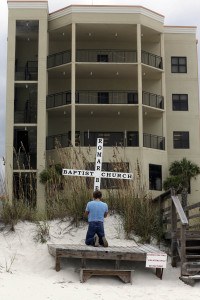 “If I got stuck down there on the beach in a Category 4 hurricane that’s where I’d go,” said Auburn University researcher Joel Hayworth, who rode out Hurricane Isaac in the church last year.

Rev. Paul Smith didn’t even consider canceling worship services last Sunday when the remnants of Tropical Storm Karen were plowing through the Gulf of Mexico just off the horizon. Instead, he baptized a visitor in the Gulf after the 9 a.m. service, which was nearly full.

Smith said some worshippers even followed him down to water’s edge for the occasion; choir members sang from a balcony as the wind gusted to about 20 mph.

“That just put the icing on the cake,” said Smith. “The surf was sort of rough. I thought I was going to get baptized a couple of times.”

Romar Baptist’s history has been shaped by hurricanes. The church began in 1995, when a group organized by Smith and his missionary brother began meeting in a restaurant. They purchased an old beach house for $550,000 and converted it into a small church two years later, enclosing the deck to make an auditorium that seated 200.

Hurricane Ivan destroyed that church and much of surrounding Orange Beach in 2004, leaving only the sign.

“All we ever recovered was a table, two hymn books and the cross from over the pulpit. It was in the top of a tree about a half-mile away,” said Smith.

Developers were soon offering millions for the approximately 1.5-acre beachfront lot, which is near condominium towers and hotels, and the price reached $14 million before the congregation agreed to sell and relocate down the road. But the deal fell through after Katrina decimated the Gulf Coast again in 2005, so the handful of remaining members decided to borrow money and rebuild where the house had been.

Built at a cost of $7 million, the church was designed by engineers to meet local building codes and then some, Smith said. What stands now is a four-floor church with a steeple on the street side and a beachfront side that’s covered with windows and balconies.

The concrete walls are reinforced with steel rods, and the building’s supports extend 18 feet into the bedrock, which is 60 feet beneath the surface of the sand. The first floor auditorium, with a beautiful view of the Gulf, is high above the parking lot.

“Last week was the first time I ever remember seeing a parasailer go by during a sermon,” said Chris Fowler, the administrative pastor and choir leader.

The church is $5 million in debt and has only three dozen or so regular members, but it draws hundreds of tourists as visitors most Sundays, said Fowler. It also receives donations from youth, choir and other groups that use its third- and fourth-floor retreat center, which can house as many as 112 people and includes a full kitchen.

The monthly mortgage payment of $22,000 sounds daunting, but Fowler said members’ tithes and donations cover it.

Local resident Davey Jones isn’t a member of Romar Baptist and has never even been inside, but he stops by the church regularly to pray at a wooden cross erected on the beach out front.

“That is my surfing spot, and this is my praying spot,” said Jones.

And sometimes, the church serves as a literal shelter from the storm. Sort of like Martin Luther wrote in the popular hymn “A Mighty Fortress is our God,” Romar Beach Baptist is a “bulwark never failing,” at least during tropical weather.

Hayworth, the Auburn researcher, and an associate stayed at Romar Baptist last year while at the beach during Isaac. They were looking for post-BP oil spill contamination dredged up by the storm, and the church was the perfect spot for beach access.

The wind howled all night and a little water leaked in through vents, but the church didn’t sustain any damage from Isaac, which made landfall in Louisiana. The generator kept humming all night.

“I felt very safe,” said Hayworth. “Now I know there is always a safe place on the coast.”