Miguel Endara nervously stepped on the edge of a boat on Biscayne Bay with a 30-pound machine strapped to his back. The machine had two pipes sticking out and a 33-foot hose that connected to a Jet Ski.

The instructor then told him to jump.

But soon after he took the plunge, Endara screamed with excitement. Instead of sinking, he was flying. Two powerful streams of water came out of the pipes like fire out of a space shuttle sending Endara 25 feet in the air.

The water sport, simply known as jetpack, has sprung up all over the world since its debut two years ago and South Florida has established itself as the overall hot spot, with 60 percent of the company’s business coming from Fort Lauderdale, Miami and the Keys.

The jetpack Endara recently tried out is the JetLev R200x. It’s the company’s flagship product but they are set to introduce two new products, a modified version of the jetpack and a hover board, in November.

Matt Rosenblatt, the owner of JetLev, a company based in Dania Beach, said the two new products – the Aquaflier and Aquaboard – will make flying accessible to a lot more people.

When the JetLev R200x launched in 2011, it cost $100,000. It was marketed to yacht owners and operators with enough capital to pay for the machine. But the Aquaflier and Aquaboard will cost less than $10,000 when they hit the market in November. Rosenblatt expects the move to shift the current market, now primarily made up of operators, to individual buyers.

“I’d like to have one in every lake and every beach in the country,” he said. “The sky’s the limit.”

Ben Smith, the owner of Rocketman, an operator in Fort Lauderdale, Miami and Key Largo, bought one of the $100,000 jetpacks in 2011 and said he is excited to see the new models join the industry. It may open up possibilities for more franchises.

“I think it’s great,” he said. “It’s a great direction they needed to take. Now you can operate in a submarket like Michigan for three months out of the year and make a profit.”

While jetpacks conjure up thrilling images of men and women flying toward the sky at blazing speeds, they don’t exactly scream safety. JetLev and Rosenblatt said they have gone through great lengths to educate clients, regulators, and insurance companies on what the product is and how it works. 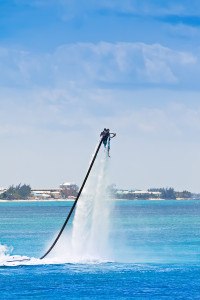 The jetpack is essentially a hose connected to a floating vacuum called a pod. The pod, which can be substituted with a Jet Ski, sucks up a high volume of water that the jetpack uses to fly. It can fly as high as 30 feet and go as fast as 30 miles per hour. The device flies because of the high amount of water volume, not pressure, so the water streams can’t hurt people, Rosenblatt said.

Even though the product went through years of testing before being sold, Rosenblatt knows that one injury could have drastic consequences.

“If anything happens, it will ruin my business,” he said.

Regulators and insurance companies had a hard time classifying the jetpack. The U.S. Coast Guard and Federal Aviation Administration went back and forth when determining which agency should oversee the device.

Ultimately, the Coast Guard granted the jetpack an exemption from the Safe Loading Standard stating in a letter sent to the company that, “to grant this exemption would not adversely affect boating safety.” The jetpack is thus sanctioned as a water sport activity. The letter dated Feb. 2, 2011, is signed by J.N. Hoedt, Chief of the Coast Guard’s Office of Boating Safety. Efforts to reach Coast Guard officials by phone and email were not successful.

“It’s definitely a strange position to educate the regulators about your product,” Rosenblatt said. “Once they understood what the product was, it wasn’t an issue.”

Apart from working with regulators, JetLev collaborates with operators to maintain a standard of safety.

The company requires operators to take a safety tutorial before buying a jetpack. If they don’t participate in the tutorial, JetLev won’t sell, Rosenblatt said.

But the mandatory safety course does not apply to people who want to buy JetLev products for personal use. Although they are strongly encouraged to take it, buyers aren’t required to do so.

If the market does shift from operators and yacht owners to personal buyers, the responsibility of staying safe will likely fall on thrill-seeking individuals.

Currently, there aren’t any laws in the books regarding jetpacks. Operators arrange where and when to fly with local agencies, whose attitude toward jetpacks can vary. In Chicago, for instance, lake officials initially resisted the use of jetpacks because of overcrowded conditions while in Fort Lauderdale the Department of Parks and Recreation welcomed jetpacks as a way of attracting tourists, Smith of Rocketman said.

Safety officials themselves don’t know what to think of the growing industry. Some wild stunts have been documented by jetpack users on YouTube.

“We’re not really sure yet how dangerous they are, if they’re dangerous,” Pat Horning, who works in a dive team that recovers bodies from Utah’s Lake Powell where there is a rise in jetpack use, told a local paper the Deseret News.

During the recent ride on Biscayne Bay, Smith, used a Jet Ski to shadow Endara as he flew the jetpack. From the Jet Ski, Smith was able to control the jetpack’s power.

This ensures safety, Smith said. If Endara had gotten too close to a nearby boat or lost control of the pack, the instructor could simply kill the power.

A few times during the 30-minute session, Smith cut the power when Endara was 30 feet in the air, just for the fun of an unexpected free fall.

“I thought it was going to hurt but I didn’t feel a thing,” he said.

When Endara finished his ride, adrenaline continued to pump through his system even after he took the gear off his back.

As Endara leaped from the water into the air, his wife Lily Vidal watched eagerly as she waited for her turn to fly. The couple, whose second date was a sky diving trip, received the jetpack rental ($250 per person) as a wedding gift.

“This is the best wedding gift we got,” she said.