Florida’s largest property insurer went before state regulators Tuesday in an effort to win approval of another round of rate hikes.

Citizens Property Insurance Corp., which covers many homeowners who live in the state’s more vulnerable coastal regions, is asking to raise insurance rates on homeowners by an average of 6.6 percent statewide in 2014 – not including increases for sinkhole coverage.

The Office of Insurance Regulation will consider the rates and decide whether to approve them in the coming weeks. Any changes will take effect for policies that renew after Jan. 1, 2014.

Property owners in some counties are facing large increases under the proposed rate changes. Some coastal regions, such as Sarasota, Palm Beach and Volusia counties, face a proposed 10 percent rate change, while owners in Alachua, Putnam and Suwanee counties are looking at less than a 1 percent increase.

Barry Gilway, president and CEO of Citizens, said that exposure to hurricanes and sinkholes were the “major drivers” behind the need for the rate hikes. 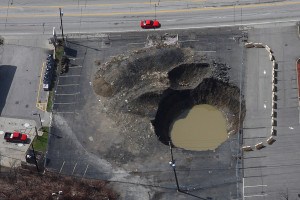 Citizens would have likely asked for larger increases next year – but state law does not allow Citizens to raise rates on most coverage more than 10 percent a year. That cap does not apply to sinkhole coverage.

Citizens has the power to place a surcharge, also called a “hurricane tax,” on its own policies and on the policies of most insurance policies if it can’t cover its losses following a major storm. That has prompted a push by Gov. Rick Scott and others to force Citizens to improve its finances. Citizens has billions of dollars in surplus now, but a series of a storms, or back-to-back years with major hurricanes, could wipe out surplus out.

Gilway emphasized that point with regulators.

“With such progress and eight years with no major storms it may appear to defy common sense that we are here asking for higher rates, especially for wind,” Gilway said. “But while we have become financially stronger, Citizens remains only a bad storm season away from breaking the bank and being forced to assess all Florida policyholders.”

The county with the most Citizens policyholders is Miami-Dade, with about 120,000 customers. If the proposed rate increase is approved by state regulators, homeowners in Miami-Dade who own a $250,000 home will pay an extra $162 for insurance in 2014.

Monroe County is another area facing large increases; policyholders on the island chain will pay some $463 more for their policies under the rate increase. The rates are even higher in Key West – $580 more for a home valued at $250,000.

Charles Wagner, a member of the group Fair Insurance Rates in Monroe, asked the board to exclude the state’s southernmost county from rate increases.

Wagner and other members of the group told the regulators that the high property insurance rates are affecting economic development in Monroe County.

“We have homeowners who are simply having to leave,” said Wagner, adding that prospective homebuyers are scared off from buying and that rental costs are skyrocketing.

“It’s difficult for our people to maintain a balance,” he said.

Sinkhole coverage is also a big issue around the state, Citizens officials said.

Statewide, the company is proposing an average sinkhole rate increase of 24.8 percent, which would produce an additional $15 million to pay sinkhole claims.

Former State Rep. Mike Fasano – who was recently appointed tax collector in Pasco County – attended the meeting and criticized Citizens for its proposed rate hikes. Customers in Pasco County, which is north of Tampa, faces a 10 percent rate hike, which translates into a $157 increase for the owner of a $250,000 home.

“For many of our constituents in the Tampa Bay area, (Citizens) is the only game in town,” Fasano said. “When they start changing rules in the middle of the game, that is unfair to the ratepayer.”

He urged the board to carefully consider not approving the rate request and to ask questions of Citizens. If a storm did hit, Fasano said, homeowners would be only too happy to take the replacement value of their home because the actual value is far less.

Scott and others have pushed to reduce the size of Citizens out of fears that it could not handle its losses following a major storm.

The Citizens board has approved deals, known as “take-outs” to shift policyholders to private insurance companies. The board says these “take-outs” are helping to reduce the state’s liability and making the rates in the private market more competitive to consumers.

Gilway said Tuesday that over the last year, 300,000 policyholders have elected to move into the private marketplace.