The Carnival Corp. filed a lawsuit last week seeking more than $12 million in damage that its cruise ship, Triumph, sustained in an early April windstorm.

AL.com reported that in the lawsuit, Carnival argues that mooring equipment being used by BAE Systems was defective. The ship broke free of its mooring during a storm that packed winds of more than 60 mph. A dock worker drowned after he was tossed into the water.

BAE Systems Support Solutions is the company that owns the private dock where the cruise ship was undergoing repairs after being stranded off the coast of Mexico for five days in February. The Triumph was towed to Mobile for repairs after an engine room fire left it adrift for days at sea with thousands of passengers on board. 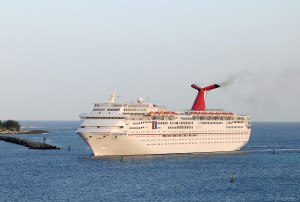 The Carnival lawsuit claims that the Triumph was dependent on shore power and other services that were being provided by BAE Systems because the ship’s main and emergency generators were not functioning when the storm hit.

The complaint says four bollards that the Triumph’s mooring lines were tied to failed and broke free from the pier where the roughly 900-foot ship was being repaired during the storm.

Officials say three of the rear lines broke and one of the lines at the front of the ship failed. The Carnival complaint alleges that this left a disproportionate amount of strain on the ship’s mooring arrangement, and caused the ship to tear away from the dock.

During the windstorm, the ship crashed into a cargo vessel and the impact left a large gash in its hull. About 600 crew members and 200 contractors were working on the ship.

BAE systems employee John “Buster” Johnson fell into the bay and drowned during the windstorm. His widow has already filed a suit against Carnival.