A large cabinet housing flight monitors that toppled on a 10-year-old Kansas boy, killing him and seriously injuring his mother at Birmingham’s newly renovated airport, wasn’t inspected by the city after installation, the city said Tuesday. 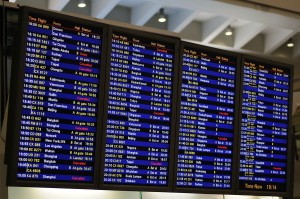 He said in emailed response to questions from The Associated Press on Tuesday that the unit rested on the floor as a free-standing cabinet, similar to a home entertainment center.

“The building code does not contemplate, and the city does not inspect furniture or cabinetry like this object,” Stine said in the email.

The cabinet and monitors, previously described by authorities as weighing between 300 and 400 pounds, were installed in a recent $201 million terminal upgrade and expansion at Birmingham-Shuttlesworth International Airport.

Stine also said inspectors were not required to inspect the display because it was not a structural component of the building.

The family was flying home to Overland Park, Kansas, after a weeklong beach trip to Destin, Fla., when the unit fell in a renovated area of the airport that opened March 13. It’s unclear what made the display fall.

Fifth-grader Luke Bresette, the middle of five children in the family of seven, died about an hour after the panel fell.

His mother, Heather Bresette, remained hospitalized Tuesday in serious condition for treatment of two broken ankles and a crushed pelvis.

Her husband, Ryan, and their two older children were with the family Friday waiting to catch their flight home and escaped injury.

But the couple’s 8-year-old son Sam had a broken leg and a broken nose and was listed in good condition Tuesday at a children’s hospital. Another son, 5-year-old Tyler, suffered a concussion and has since been released.

Neither the Alabama Department of Transportation nor Federal Aviation Administration is investigating. They lack jurisdiction over airport terminals.

Stine’s description of the unit matched that of Birmingham real estate manager Albert Osorio, who was inside the terminal and helped other men lift it off the child.

“I saw no bolts, nothing holding the thing to the wall at all,” Osorio said. “It looked like a bookcase up against the wall.”

Osorio said it appeared someone had applied heavy-duty construction adhesive to the bottom of the unit in a bid to secure it to the terminal floor.

Osorio, who helped hold up the unit while others tried to aid the injured, said he has a 10-year-old son of his own and was angered by the boy’s death. Airport workers did not have first aid equipment to help the child, he said.

Herrera-Bast said she did not know whether anyone had inspected the flight display before officials opened the building to passengers earlier this month. She referred questions to contractor Brasfield & Gorrie-Bloc Global Services Group of Birmingham, which declined comment.

“Because of the ongoing evaluation, it would be inappropriate for us to comment further at this time,” the company said in a statement. “The analysis is being conducted with the cooperation of the airport authority, design partners and other local officials.”

Ryan Bresette, in a public post on his Facebook page, said he and his wife love their children “more than they will ever know.”

“It is not fair to have to watch the pain on my children’s faces,” he wrote.