NASCAR officials still have some cleaning up to do amid growing questions about fan safety.

At least 33 people were injured when a car flew into the fence during a NASCAR race at Daytona International Speedway, sending a tire and large pieces of debris sailing into the stands.

“Just seeing the carnage on the racetrack, it was truly unbelievable,” driver Justin Allgaier said. 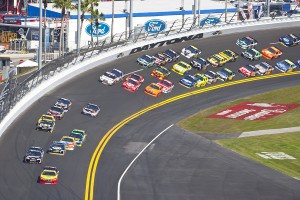 The final-lap accident Saturday marred the second-tier Nationwide Series race on the eve of a spectacle often called the Super Bowl of motorsports. Late into the night, track workers were scrambling to repair a huge section of fence that separates fans from the high-speed track.

Speedway President Joie Chitwood III has a news conference scheduled for Sunday morning to give the latest update on repairs and any safety changes that could be made before the “Great American Race.”

The 12-car crash began about 200 feet from the start-finish line as the front-runners approached the checkered flag. Leader Regan Smith attempted to block Brad Keselowski for the win, triggering a horrific pileup that could have been much worse.

The front end of Larson’s No. 32 car was sheared off, and his burning engine wedged through a gaping hole in the fence. Parts and pieces of his car sprayed into the stands, including a tire that cleared the top of the fence and landed midway up the spectator section closest to the track.

The 20-year-old Larson stood in shock a few feet from his car as fans in the stands waved frantically for help. Smoke from the burning engine briefly clouded the area, and emergency vehicles descended on the scene.

Ambulance sirens could be heard wailing behind the grandstands at a time the race winner would typically be doing celebratory burnouts.

“It was freaky. When I looked to my right, the accident happened,” Rick Harpster of Orange Park said. “I looked over and I saw a tire fly straight over the fence into the stands, but after that I didn’t see anything else. That was the worst thing I have seen, seeing that tire fly into the stands. I knew it was going to be severe.”

Shannan Devine of Egg Harbor Township, N.J., was sitting about 250 feet from where the car smashed into the fence and could see plumes of smoke directly in front of her.

“I didn’t know if there was a car on top of people. I didn’t know what to think,” she said. “I’m an emotional person and I immediately started to cry. It was very scary. Absolutely scary. I love the speed of the sport. But it’s so dangerous.”

Chitwood said 14 fans were treated on site and 14 others were taken to hospitals. Local officials said 19 people were taken to neighboring hospitals, including two who were in critical but stable condition.

Stewart, who won for the 19th time at Daytona and seventh time in the last nine season-opening Nationwide races, was in no mood to celebrate.

“The important thing is what is going on on the frontstretch right now,” said Stewart, a three-time NASCAR champion. “We’ve always known, and since racing started, this is a dangerous sport. But it’s hard. We assume that risk, but it’s hard when the fans get caught up in it.

“So as much as we want to celebrate right now and as much as this is a big deal to us, I’m more worried about the drivers and the fans that are in the stands right now because that was … I could see it all in my mirror, and it didn’t look good from where I was at.”

There were at least five stretchers carrying injured people out of the stands, and a helicopter flew overhead.

Officials turned their attention to the track and the wreckage after injured were treated.

A forklift plucked Larson’s engine out of the fence, and workers carried the tire out of the stands.

It was a chaotic finish to a race that was stopped for nearly 20 minutes five laps from the finish by a 13-car accident that sent driver Michael Annett to a hospital. His Richard Petty Motorsports team said he would be held overnight with bruising to his chest.

The race resumed with three laps to go, and the final accident occurred with Smith trying to hold off Keselowski through the final turn.

“It’s Daytona. You want to go for the win here,” Smith said. “I don’t know how you can play it any different, other than concede second place, and I wasn’t willing to do that today. Our job is to put them in position to win, and it was, and it didn’t work out.”

As the cars began wrecking all around Smith and Keselowski, Stewart slid through for the win, but Larson plowed into Keselowski and his car was sent airborne into the fence. When Larson’s car came to a stop, it was missing its entire front end. Larson, who made his Daytona debut this week, stood with his hands on his hips before finally making the mandatory trip to the care center.

“I took a couple big hits there and saw my engine was gone,” Larson said. “Just hope everybody’s all right.”

It appeared fans were lined up along the fence when Larson’s car got airborne. But Chitwood said there was a buffer, adding there would be no changes to the seating before the Daytona 500.

Keselowski watched a replay of the accident and said it could cast a pall on the Daytona 500.

“I think until we know exactly the statuses of everyone involved, it’s hard to lock yourself into the 500,” Keselowski said. “Hopefully, we’ll know soon and hopefully everyone’s OK. And if that’s the case, we’ll staring focusing on Sunday.”