The pack is apparently here to stay and NASCAR drivers don’t like it one bit.

That includes Dale Earnhardt Jr., who earned seven of his 19 career victories slicing and dicing his way through traffic in restrictor-plate races. NASCAR’s most popular driver called pack racing “bloodthirsty” and unsafe after Sunday’s race at Talladega Superspeedway, which was marred by a last-lap 25-car accident. 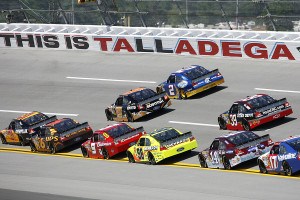 “I don’t even want to go to Daytona or Talladega next year, but I ain’t got much choice,” Earnhardt grumbled.

Tony Stewart, who so abhors blocking he has threatened on multiple occasions to wreck any driver who does it to him, threw the biggest block of them all Sunday while trying to hold on to a victory at Talladega. His defensive driving sent his car sailing up and over the field, triggering the accident that collected 10 of the 12 Chase championship contenders.

He immediately took responsibility for causing the wreck. But at least one rival believed the defending NASCAR champion wasn’t entirely culpable for an accident everyone knew was going to happen.

“When you look at the bigger picture is that really what caused it?” asked Jeff Gordon. “Tony is a guy that takes blame for things and you’ve got to respect him for that, but I think there is a little more to it.”

The bigger picture is the overall danger that’s created by the current NASCAR rule package used in restrictor-plate racing. The plates are needed to throttle horsepower at Daytona and Talladega, NASCAR’s two biggest and fastest tracks, but they keep the cars bunched together in huge packs where the slightest slip can wipe out most of the field.

Teams figured out over the last few years that hooking up in two-car tandems was more effective, but the new style of racing infuriated fans who screamed to NASCAR they wanted the white-knuckle pack racing to return. NASCAR listened and worked all winter on a rules package that would break up the tandems and bring back the pack.

A jet-dryer explosion in the season-opening Daytona 500 overshadowed the fact that there were three multi-car accidents, including one that knocked out Jimmie Johnson on the second lap of the race and an eight-car wreck that sent the race into overtime. And, after an 11-car last-lap accident took out all the leaders in the Nationwide race, drivers warned of the danger going into the Daytona 500.

Drivers can either run out front all race and hope for the best or hang back and then go for it late – in packs.

“I feel like we walk a line in this sport between daredevils and chess players,” Brad Keselowski said in February. “When we come to Daytona and a track like this, we’re maybe more on the daredevil side of the line. And then we go other places where I’d say we’re more on the chess-player side of the line. I think it’s important to have tracks like this that maybe average it back out a little bit.

“Ideally, we’d like to just walk straight down the line all the time. But from a standpoint of the sport and the health of it, I think not a lot of people watch chess matches, and I’ve never seen one televised.”

There was a nine-car accident with four laps to go at Talladega in May, and that was a day after Eric McClure was hospitalized following a late wreck in the Nationwide Series race. The race to the checkered flag at Daytona in July led to a 15-car accident on the final lap, and then came Sunday’s demolition derby.

“There has been a last-lap wreck in like 90 percent of these things for the last four years with this car,” said Earnhardt. “Somebody needs to change it.”

The introduction of the 2013 car has given NASCAR an opportunity to address several racing concerns, but most of it seems centered on improving the product at intermediate tracks. There’s been little to no public discussion about plate racing beyond the grumbling of drivers tired of wrecking.

It was Stewart, remember, who assailed the racing in May with a four-minute, tongue-in-cheek Q&A that dripped in sarcasm directed at the perceived notion that fans want to see wrecks, not racing.

“It’s not fair to these fans for them to not see more wrecks than that and more torn-up cars,” he said. “We still had over half the cars running at the end, and it shouldn’t be that way.”

“From an entertainment standpoint, they should be lined up out to the highway,” he said after finishing second Sunday. “If I’m a race fan, I want to see two and three wide racing all day long, passing back and forth. I want to see guys shoving one another. I want to see the ‘big one’ at the end of the race because guys are being so aggressive … and sort of defying danger.”

But they didn’t show up on Sunday. NASCAR’s estimated crowd of 88,000 was the smallest since figures have been provided, and was down by 20,000 from the previous low of 108,000 in May, and coming at a track that used to pull in more than 300,000 people for its two annual events.

Maybe that’s an indicator that the fans really don’t want to see the carnage, or they already know how the race is going to develop. After all, the plate races follow a pretty similar script: drivers ride around for 490 or so miles, and a big wreck breaks out in that frantic push to the finish. The complaining about last year’s two-car tandem racing is proof NASCAR will never be able to please all of the fans all of the time. But they can at least try to limit the destruction.