Most of the time, they are simple fender benders and those involved own up to their mistakes. Sometimes, there are witnesses who can fill in the blanks. Other times, however, drivers disagree about what happened, someone leaves the scene, or no one survives the crash.

It is then that law enforcement conducts a crash reconstruction – using science to sort out what really happened from what people claim happened. 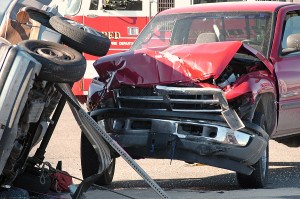 “Crashes happen in fractions of a second,” said Lt. Curt Tilly, a state police reconstructionist since 1998. “People don’t see everything. They don’t remember everything.”

“It’s like putting a puzzle together and having to find all the pieces,” he said.

David Harris has been a police officer in St. Albans for 23 years. First trained in 1999, Harris does reconstructions for his department and for insurance companies and attorneys in private cases through his business, Harris Enterprises.

People are often surprised at the things a reconstruction specialist can learn by looking at a crash scene and the vehicles themselves, Harris said.

In addition to surveying skid marks and impact damage, Harris mines for information inside the car. There are event data recorders inside a vehicle that store all sorts of details, he said.

For example, airbag modules might be able to reveal the speed a vehicle was traveling, the throttle position, RPM, seat-belt usage, roll rate and more, Harris said. Each model of vehicle records different information, though.

Those details help paint a picture of the events leading up to the crash, but only when coupled with additional information, Tilley said.

“It’s not like the black box in an airplane that gives you everything,” Tilley said. “You still need to do the reconstruction.”

A lot of the other work is done with high-tech computer software and old-fashioned paper and pencil – and it can take days.

“There’s a lot of physics and algebra involved in it,” Harris explained.

Skid marks are measured, vehicle positioning and road conditions are documented, and everything is put on a diagram.

Complicated formulas are used to determine speed, changes in velocity, angles of impact and more.

Ron Eck, a civil engineer and WVU professor emeritus, has been doing reconstructions for more than 25 years. He honed his expertise figuring out how crashes happened to determine if road conditions were to blame.

He said reconstructions can still be done after the crash scene is cleared if the officers on scene gathered good information. In that case, he’ll review police reports, witness statements, crash scene photos and the vehicles, if they are still available. He’ll also go to the scene to take measurements and to note where things are.

Sometimes, reconstructionists are called to testify in civil and criminal court cases.

Harris said he always rechecks his calculations by hand before he takes the stand.

If the parties disagree on what happened, each side might call its own reconstructionist to testify.

Harris said it’s not an exact science and two experts can come to different conclusions.

When different accounts are given, Harris said, it is up to the jury to decide what to believe.

A reconstruction was used in the high-profile trial of Brian Stone, a repeat DUI offender who ultimately was convicted of driving drunk and causing the crash on Interstate 68 in 2007 that killed five people from two families.

State Police Sgt. Scott Crouch’s reconstruction, presented by the prosecution, showed that Stone’s truck hit the side of one of the families’ cars, which caused the car to veer into the path of the other family’s SUV, according to The Dominion Post archives.

Using animation, Crouch was able to show how the crash occurred – from the perspectives of passengers.