Coal producer Alpha Natural Resources says it has taken steps to avoid coal dust violations of the kind that investigators say caused the 2010 Upper Big Branch Mine explosion that killed 29 men, according to a letter the Bristol, Va.-based company sent to federal prosecutors last week. 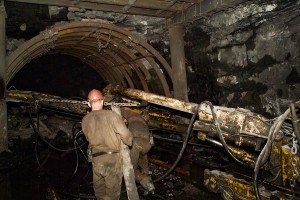 The Charleston Gazette reports that in the letter to U.S. Attorney Booth Goodwin, Alpha said it has added staff and made other changes, but the company did not give any further specifics.

But more information could become public next month when Alpha is expected to provide a progress report on its effort to reform operations that it purchased from Massey Energy Co.

“We do expect that the company will provide more detail on the specific levels of resources that have been devoted to rock-dusting and cleanup of dust accumulations,” Goodwin told the newspaper.

The report is part of a December $210 million settlement made with the U.S. Department of Justice. As part of the settlement, the company also agreed to install significant new safety technology, create a trust to fund health and safety research, and take other steps to improve safety practices.

In the letter, a lawyer representing Alpha said the company began taking steps to improve Massey operations immediately after the June 2011 merger.

The company says it has brought in special teams and outside consultants to assess and correct safety issues. It also says a significant number of staff were assigned to address compliance issues.

As a result, Alpha said it has seen an overall decline in coal dust-related citations.

Investigations have determined that Massey allowed highly explosive methane gas and coal dust to accumulate at Upper Big Branch, and that worn and broken cutting equipment created the spark that ignited the fuel. Broken and clogged water sprayers allowed a mere flare-up to turn into an inferno that ripped through miles of underground tunnels and killed men instantly.