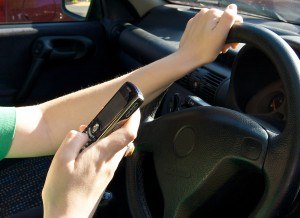 Joyce Concklin has 10 good reasons why every state should pass a ban on texting while driving: That’s the number of bones she broke when a texting driver ran into her. And that driver died, his mobile phone still clutched in his hand.

Concklin’s accident happened in Texas, but she says it easily could have happened in Florida, where she lives.

Both states are among those that haven’t outlawed texting by all drivers operating motor vehicles. Thirty-five states and the District of Columbia already have bans, according to the Governors Highway Safety Association.

The Florida Legislature, with Republican supermajorities in both chambers, has been hostile to anti-texting bills; one died in committee last year. The reason generally given is that it would be government intrusion into people’s lives.

“There are already laws on the books that make it illegal to drive unsafely,” said Jim Harper, director of information policy studies for the libertarian Cato Institute. Florida has a “reckless driving” law.

Concklin, who is partly disabled because of the wreck, sees it differently.

“We may be infringing on your rights a little, but you’re infringing on us,” the 53-year-old Hernando County horse trainer said. “This (accident) changed my life, and not for the better.”

A Senate bill (SB 416) banning texting while driving has zipped through three committees with only two votes cast against it, but it has not been scheduled for a final vote by the full chamber. The House version (HB 299) has gone nowhere.

A spokeswoman for Republican Gov. Rick Scott, who usually pushes for limited government and less regulation, says he hasn’t taken a position on a ban. As a candidate in 2010, he did tell AAA “distracted driving of any kind (including texting) has to be discouraged.” He said he’d work with lawmakers “to adopt policies that address distracted driving.” He says a texting driver once struck his wife’s car.

Both bills would make texting subject to secondary enforcement, meaning police could cite drivers for it only if they had been pulled over for another violation such as speeding. A first violation would be a $30 fine; a second violation within five years would be $60.

And if texting resulted in a crash, the driver would be assessed six points – 12 points within a year leads to a 30-day driver’s license suspension. Points also lead to increased insurance rates.

The House sponsor, Republican Rep. Ray Pilon of Sarasota, said his bill is in limbo in the transportation and highway safety subcommittee. The chair, Rep. Brad Drake, said the law is unnecessary.

“It’s difficult to legislate every kind of human behavior and then try and enforce it,” Drake said. “People just need to be responsible for themselves.”

The federal government says a texting driver is 23 times more likely to crash than one not texting. A study by AAA puts the figure lower at six times. The Florida Highway Patrol already prohibits its troopers from texting while driving on duty.

But critics point out that texting bans haven’t had an effect on the number of accidents. A 2010 study by the Highway Loss Data Institute, which looks at insurance claims, said crashes didn’t decrease in states that banned texting by drivers, and in fact found that reported collisions went up slightly.

Researchers surmise the bans are making a bad situation worse by causing drivers, knowing it’s illegal, to move their phones down and out of sight when they text, taking their eyes further away from the road.

Of the 171,538 Florida crash reports filed during the first 10 months of last year, 149 of drivers in those wrecks – less than 1 percent – were known to be texting, state highway safety spokeswoman Courtney Heidelberg said.

Another brochure on the Florida Department of Highway Safety and Motor Vehicles website includes “smoking” and even “other people inside or outside the vehicle.”

But one in seven drivers have admitted to reading or sending a text message while driving, according to department figures, and nearly half of all 16- and 17-year-old drivers text and drive.

And certainly, texting and driving at the same time can be dangerous.

Drivers who text take their eyes off the road for almost 5 seconds, according to the Federal Motor Carrier Safety Administration, which regulates the trucking industry. At 55 mph, a driver can cross the equivalent of a football field while not looking.

It’s that risk that caught up with Concklin. In 2010, she was riding in a 1-ton GMC truck that her husband was driving back to Florida from Texas after a deer-hunting trip.

Suddenly, she heard her husband say, “What’s that guy doing?” A driver in a SUV barreling toward them at 70 mph had his head down and veered into their lane. Concklin’s husband tried to swerve.

The other driver “popped his head up just as our tires began to squeal,” she said. It was too late; they struck almost head on.

The SUV driver, a 20-year-old, died at the scene with his phone still in his hand, a crash report said. He had just bought his vehicle about a half-hour before the wreck.

Concklin was pinned in the truck until help arrived. She spent four days in the hospital and now has wire in her knee and plates and screws in her arm.

She says she can’t fully train horses because she no longer has the flexibility.

Whatever the Legislature does – or doesn’t do – this year about texting and driving, Concklin uses her ordeal to spread a simple lesson: “If it’s that important, pull off the road.”