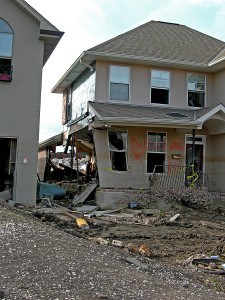 The Mississippi Supreme Court has overturned a judgment for an insurance company in a wind vs. water case involving a Pascagoula home hit by 6.3 feet of storm surge during Hurricane Katrina in 2005.

The National Flood Insurance Program paid Michael Robichaux and his wife, Mary, who has since died, policy limits for the loss of their home and its contents – $136,500 for the home and $70,400 for contents.

At issue was whether Nationwide Mutual Fire Insurance Co. owed the Robichauxes any money for wind damage. Robichaux’s attorneys said he’s owed at least $60,000. Nationwide says no, but for different reasons than the company used in 2009 in an earlier water vs. wind case.

The trial judge erred in dismissing the case, the Mississippi court ruled this past week.

Justice Jim Kitchens wrote in the decision that there were “genuine issues of material fact” over whether structures and personal property covered under the Robichaux’s policy “were damaged by wind prior to the destructive force of the storm surge.”

In the earlier wind vs. water case, the Supreme Court decided Mississippi law requires insurance companies must prove a hurricane’s tidal surge, rather than wind, caused a loss to deny coverage. Wind and water are separate forces, the court reasoned, that cause different types of damage. Wind damage is covered under an all-perils policy.

In the Robichaux case, Nationwide contended storm surge caused all the damage to the home, based on expert reports.

“Given that this case is to be remanded on the issue of whether wind was a proximate cause of damage prior to the destruction of the other structures and personal property by storm surge … Nationwide has the burden of proving that the other structures under Coverage B were damaged by an excluded peril.

“The converse is true with regard to the Robichauxes’ burden of proving that personal property under Coverage C suffered accidental, direct, physical loss as a result of one of the enumerated perils, namely windstorm,” Kitchens said.