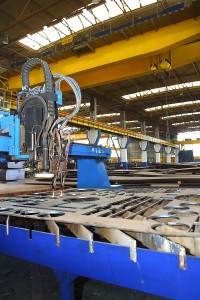 Each year, people are killed and maimed by explosions of finely powdered wood, metal or chemicals at factories around the country. Safety experts have studied the threat posed by dust at industrial sites for nearly a decade, yet tighter regulations are still years away.

Among the reasons for the delay are a cumbersome rulemaking process and disagreement among federal agencies about how to best tackle the problem. Meanwhile, workers continue to die.

Combustible dust has been linked to at least six deaths at factories this year, five of them in separate accidents at a Tennessee plant that makes metal powders for automotive and industrial uses. Another worker was seriously injured by a fireball that investigators blame on an accumulation of iron dust at the same Hoeganaes Corp. plant in Gallatin, Tenn.

“The science of explosion control is pretty simple. It’s not rocket science,” said retired University of Michigan Professor of Aeronautical Engineering Bill Kauffman. “If you can see your footprint or can write your name on the wall, it’s going to explode.”

These industrial sites are regulated separately from grain handling facilities like the one that exploded last month in Kansas, also killing six. While that tragedy served as a reminder of the dangers for grain industry workers, experts say there are even fewer protections for their 2.5 million counterparts around the country in other industries susceptible to dust explosions.

In an inspection prior to the deadly explosions in Tennessee, dust hazards weren’t checked. Hoeganaes was fined days before the second fatal blast, but not for breaking rules meant to prevent dust explosions – because there are none. The plant continues to operate.

That frustrates Mitchel Corley, whose younger brother died from injuries caused by one of the explosions.

“Yes. I’m mad. Absolutely. They knew for certain that dust was flammable,” he said of the company.

Figures compiled by the U.S. Chemical Safety Board illustrate the scope of the problem. A 2006 study reported there were at least 281 dust explosions in the U.S. between 1980 and 2005 that killed 119 workers and injured 718. In 2007, it recommended that the Occupational Health and Safety Administration create workplace rules to control dust and cut down on explosions. The Chemical Safety Board is charged with investigating industrial accidents, but it must rely on regulatory agencies like OSHA to effect change from its findings.

“Despite the seriousness of the combustible dust problem in industry, OSHA lacks a comprehensive standard to require employers in general industry to implement the dust explosion prevention and mitigation measures,” the Chemical Safety Board wrote in its 2007 report.

OSHA decided instead to initiate a National Emphasis Program that stepped up education and inspections at plants in key industries. While the aim is to reduce dust explosions, inspectors have had to use regulations related to worker training and housekeeping because dust-specific rules are still being developed. The Chemical Safety Board says the rules currently being used are insufficient for preventing dust explosions.

Figures from the Chemical Safety Board indicate dust explosions have happened just as often since it asked for stricter dust rules. There have been at least 35 explosions with 26 dead and 128 hurt since the beginning of 2008.

At the Hoeganaes plant in Tennessee, two workers were killed after a January blast blamed on iron dust. In March, while that accident was still under investigation, a second explosion at the factory created a fireball that seriously injured another worker.

Then a third blast, in May, killed three more Hoeganaes workers just days after Tennessee’s Occupational Health and Safety Administration fined the plant for 12 worker safety violations from the earlier two accidents.

The safety board’s statistics show it is unusual for one plant to have so many dust explosions in such a short time. It investigated the accidents and found that company officials knew the dust that covered flat surfaces all over the plant was explosive.

Chemical Safety Board Chairman Rafael Moure-Eraso said in June that the plant should not reopen until it was completely redesigned, but the board does not have the power to close the plant.

The Hoeganaes plant wasn’t redesigned, but it did reopen after what company Vice President of Human Resources Mike Mattingly in May called “a comprehensive safety review.” He declined to be interviewed for this story.

The Hoeganaes plant’s last inspection before the explosions had been in 2008, and the inspector did not look for dust hazards or even enter production areas. That’s despite Tennessee’s participation in the National Emphasis Program. According to a Tennessee OSHA official, Hoeganaes wasn’t on an OSHA list of plants considered to be at high risk for dust explosions.

Assistant Labor Secretary Jordan Barab says he believes it’s too early to assess the effectiveness of the program.

A 2009 OSHA status report found that inspectors had issued more than 4,900 citations at targeted factories in a little under two years. On average, those factories received twice as many citations as facilities not targeted by the program.

The report did not draw any conclusions about the program’s effectiveness.

“We have a lot of data collected, but it’s too early to do an outcome-based analysis,” Barab said in an interview.

In 2009, three years after the Chemical Safety Board recommended OSHA adopt rules specific to combustible dust, the latter agency began the rulemaking process. But there are numerous steps required before any new rules are implemented. The agency has to consider the cost to the industry as well as worker safety.

Similar rules for different workplaces have paid off. OSHA has had regulations governing combustible dust in grain handling facilities since 1987, and a 2003 review of those rules by OSHA found they had reduced deaths from grain dust explosions by 70 percent. Those rules are very specific. Grain dust is not allowed to accumulate on surfaces to a depth of more than 1/8 inch in defined “priority areas” of the facilities.

In the aftermath of the Kansas explosion, experts said the facilities generally are safer than ever, but that only so much can be done to prevent deadly blasts.

The coal mining industry also has rules to prevent dust explosions that require noncombustible rock dust to be sprayed throughout a mine.

Not everyone thinks the OSHA’s process for implementing rules for other industries needs to be complicated.

Kauffman, the retired professor, advised OSHA on its 1987 grain dust rules and acted as an expert witness on a panel this May that was convened to discuss new combustible dust regulations. Kauffman said the grain dust regulations were originally opposed by industry as too costly, but they were so effective that those same industries soon embraced them.

The slow pace of OSHA’s rulemaking angers Mitchell Corley, whose brother was killed at the Hoeganaes plant.

The Chemical Safety Board found that Hoeganaes submitted 23 dust samples from the Gallatin facility to an independent laboratory last year, and 14 were found to be combustible.

But Corley, who still has friends working at the plant, said the problem was obvious to everyone there, even without a laboratory analysis.

Speaking of his brother, Corely said, “He had talked about the dangers. He knew he worked in a dangerous facility. Like all the guys who worked there every day, he didn’t think it would happen to him. You gotta think that way.”

Despite Wayne Corley’s severe burns, the family hoped he would recover. He died May 21, leaving a wife and four children, ages 11 to 3.

“The little ones are doing pretty good,” Corley said. “It’s hard for them to comprehend. They’ve got a ‘Daddy star’ and they look up at the sky and tell him ‘Hi.”‘