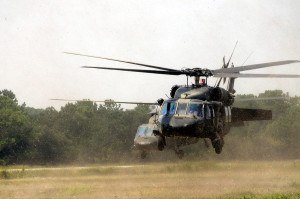 The Marine Corps says a number of people were injured by debris sent flying by wind from a military helicopter’s rotors as it departed the Havelock Chili Festival.

Marine officials said in a news release that the debris was swept up by the rotors of Marine Transport Squadron 1’s Pedro search-and-rescue helicopter at about 4 p.m. The helicopter was returning to Marine Corps Air Station Cherry Point.

The Jacksonville Daily News reported on its website that at least four people were hurt by flying tents and debris when the helicopter took off as officials were preparing for an awards ceremony. Their conditions were not immediately known.