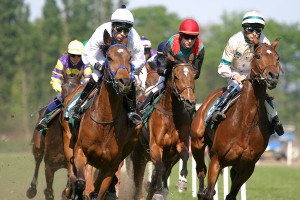 Churchill spokeswoman Julie Koenig Loignon told The Courier-Journal that the company’s four tracks will continue to pay for an insurance policy that covers jockeys for up to $1 million in medical expenses for on-track injuries.

For off-track concerns, Loignon said the guild needs to work with other racing industry members on compensation, benefits and insurance coverage not related to on-track events.

The Louisville-based company’s current agreement with The Jockeys’ Guild expires at the end of the year and provides per-starter and per-race-day fees to the guild.

“Everything’s on the table,” he said.

Loignon said the payments in the current agreement were designed to help the guild address off-track needs.

“We are doing our part and paying our fair share, and that’s not changing,” Loignon said.

The current contract was reached in 2007 at the same time that Churchill and the guild settled what was then a 2-year-old lawsuit. Churchill had sued after riders boycotted races at its flagship Louisville track and Hoosier Park in Anderson, Ind., which it owned at the time.

Riders were concerned about insurance coverage following injuries in spills throughout the country.

Churchill’s concerns were fueled by concerns about how mount fees paid prior to the lawsuit were being used. The guild at the time was in a financial crisis and management fight that ultimately led to bankruptcy and new leadership.

Smoke Damage a Source of Friction for ‘Standing Home Survivors’