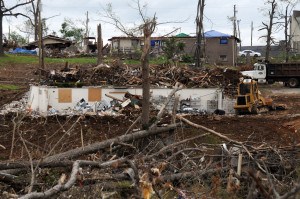 A new study of tornado destruction in Tuscaloosa found that relatively minor changes in construction – things like better shingles, more anchors and thicker vinyl siding – could have prevented much of the damage to houses on the fringes of the twister.

Researchers said nothing could have saved structures that were in the direct path of the EF-4 tornado, which skirted the University of Alabama campus with winds up to 190 mph on its way through the city. Forecasters said it was one of the strongest twisters to hit the state during the severe weather outbreak that killed more than 240 people statewide on April 27.

“The winds are so high that a wood-frame structure is not going to withstand them. In those cases, you need a safe room,” said researcher Andy Graettinger of the University of Alabama. “But the vast majority of the area (experienced) lower wind speeds that you can engineer for. You need to have the roof tied to the walls and the walls tied to the foundation to prevent major damage.”

Homeowners on the fringes of the tornado would have been spared at least some damage with different construction methods or improvements to existing homes, Graettinger said. In some cases, he said, homes could have been saved from catastrophic damage by metal clips or straps that cost about $1 each.

“You’re looking at a few thousand dollars for these clips that hold everything together,” Graettinger said in an interview Friday. “It’s a very small amount compared to the cost of the house.”

A research team funded by the National Science Foundation assessed more than 150 homes along the nearly six-mile path of the tornado in Tuscaloosa, looking at everything from homes that were leveled to those that weren’t damaged at all.

The most serious damage was at the center of the path of destruction, where the swirling winds were strongest and the most debris flew through the air. Homes on the edges of the storm received far less damage because the storm was weaker on its edges, and the team focused on how to reduce damage in that zone.

Researchers found that basic changes like using wind-rated shingles; additional anchors at the bottom of porch columns; metal straps to link roofs with walls; and higher-quality vinyl siding could have made a huge difference in how well some homes survived the storm.

“We would have saved a lot of rebuilding cost if that had been done,” said Graettinger, who worked with Alabama engineering professor John W. van de Lindt and other researchers on the project.

Researchers didn’t determine how much the needed changes would add to the cost of a new home, or the cost of retrofitting existing homes to make them stronger. But they hope the findings will lead to better construction techniques in tornado-prone areas, much as coastal areas have adapted building codes and methods to help structures withstand hurricanes.