The town of West, Texas, and several other plaintiffs have reached settlements and partial settlements of claims stemming from a deadly explosion in the central Texas town. 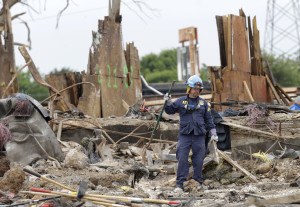 On April 13, 2013, a blaze heated up 30 tons of ammonium nitrate. Investigators don’t know for sure what detonated the fertilizer, which can also be used as an explosive. The blast carved a crater 10 feet deep and damaged nearby schools. Twelve of the 15 who died were first responders; more than 300 people were injured.

A government study found that while 54 percent of the people who went to the hospital after the explosion had been within 1,000 feet of the blast, many who sought medical help had been farther away.

The fire involved a 12,000 square foot wood frame seed and fertilizer building at the West Fertilizer Plant, known as the Bulk Processing Plant, which had no fire resistance rating. The Uniform Fire Code wasn’t published until 1971 after the building’s construction sometime in the 1960’s.

When the safety board investigated, it pointed to a lack of regulations about “siting of facilities that store and distribute” ammonium-nitrate fertilizer and said regulations addressing issues such as buffer zones or barricades, “the severity of the casualties and damage experienced in West could have been significantly reduced.”

Waco-based state District Judge Jim Meyer canceled a trial set to begin today. The settlements are the latest among more than 200 claims filed in the aftermath of the West Fertilizer Co. blast that killed 15 people and left dozens injured. As the fire raged, the building’s roof collapsed and an explosion rocked the city of approximately 2800 people. The blast killed 10 firefighters and five civilians. Several firefighters suffered serious injuries.

Insured losses as a result of the fire and explosion were estimated to be $100 million.

Plaintiffs’ spokesman and Waco attorney Steve Harrison tells the Waco Tribune-Herald the city and a nursing home reached settlements with CF Industries but have unresolved claims against the other major defendant in the case, El Dorado Chemical Co.

Defendants either manufactured or sold fertilizer that caught fire and exploded. They’ve denied any wrongdoing.