In Houston alone, it’s estimated that 300,000-500,000 vehicles will be deemed a total loss because of flood damage due to Harvey. That’s according to Cox Automotive’s chief economist’s analysis of the number of vehicles lost due to Sandy (250,000), as well as damage resulting from Katrina.

The Insurance Council of Texas reported 100,000 claims had been received for flood-damaged cars as of Thursday morning. According to Mark Hanna, spokesperson for the ICT, 15 percent of motorists in Texas have no auto insurance whatsoever. Of the remaining 85 percent who are insured, 75 percent carry comprehensive coverage – a necessity for flood coverage.

Nearly a week after the storm began, a warning has been issued by the National Insurance Crime Bureau (NICB), that consumers should be on alert that Harvey flooded vehicles could soon be for sale around the nation.

Cars deemed to be a total loss, according to the NICB, will be retitled with the state’s Department of Motor Vehicles and the new title will indicate that the vehicle has sustained flood damage. Most vehicles are sold to parts’ companies who will dismantle them and re-sell usable parts that were not damaged by the flooding, the NICB reports.

NICB’s VINCheck allows car buyers to see whether a vehicle has ever been declared as “salvage” or a total loss by an NICB member that participates in the program. It also alerts users if a vehicle has been stolen and is still unrecovered. VINCheck is a free service available at: www.nicb.org/theft_and_fraud_awareness/vincheck/vincheck.

The anti-fraud organization said that some flooded vehicles may be purchased at bargain prices, cleaned up and moved out of state where the VIN is switched and the car is retitled with no indication it has been damaged.

The NICB warns that uninsured Harvey-damaged vehicles may be cleaned up and placed for sale by the owner or an unscrupulous dealer with no disclosure of the flood damage. It recommends buyers have a vehicle checked by a reputable mechanic or repair facility before handing over any cash.

According to the Texas DMV, titles may be branded with one of two brands designated by the NMVTIS:

Flood Damaged – The vehicle was damaged by freshwater flood or by flood of unknown origin.

Salt Water Damaged – The vehicle was damaged by saltwater flood.

The Texas DMV offers a comprehensive checklist to spot a water-damaged vehicles:

Another checklist offered by CARFAX, a company that offers vehicle history information, provides additional signs of flooding. These include:

In addition, the firm recommends checking for flood damage by turning the ignition on and checking the instrument panel to make sure it lights up. Lights, air conditioning, windshield wipers, the radio, turn signals and the heater should be tested repeatedly to make sure they are operational.

Last year, CARFAX released its analysis of the number of flooded cars on the nation’s roadways in 2016. Houston topped the list. 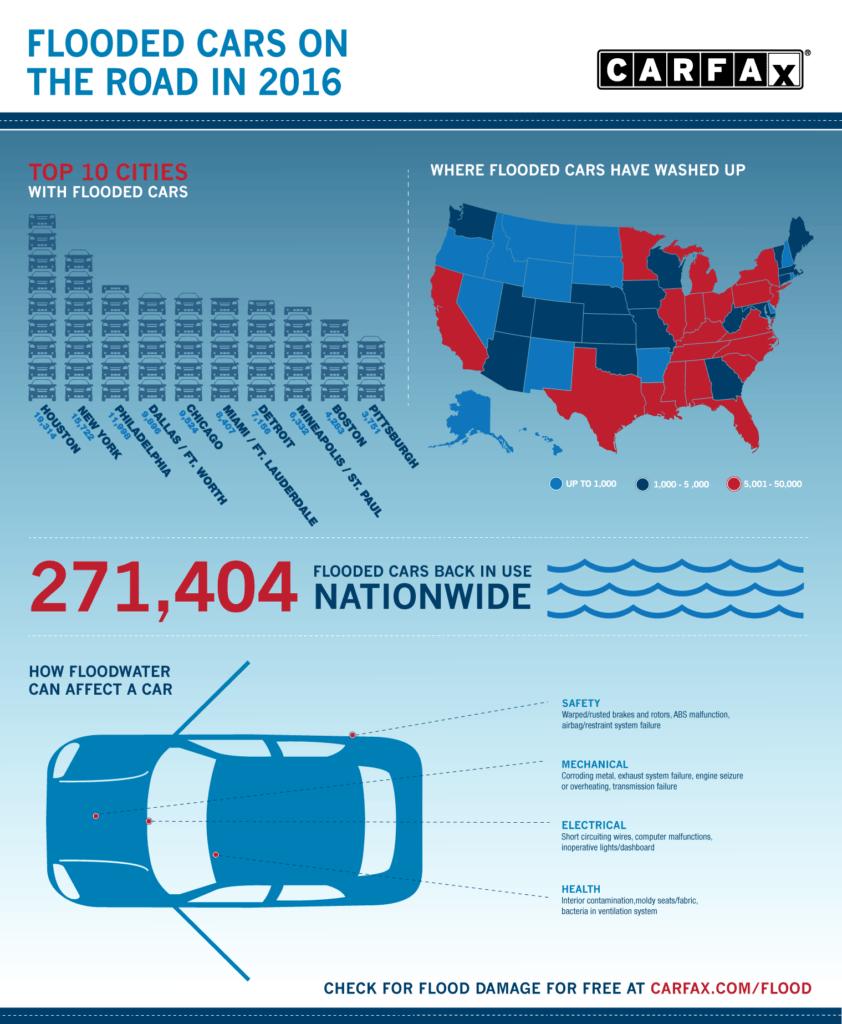 The company offers consumers the ability to check for flood-damage free of charge at CARFAX.COM/FLOOD

According to its Facebook page, Copart’s Houston salvage yard was open and operational as of yesterday morning. The Texas-based salvage firm has a fleet of disaster relief tow trucks ready to be deployed.

“We have team members on the ground already and are committed to executing relentlessly to assist in the community’s recovery,” said Copart CEO Jay Adair.