Stormy weather swept across much of Texas over this past week, and a new weather app is designed to help with flash flooding.

University of Texas at Arlington associate professor D.J. Seo has launching the crowdsourcing app, iSeeFlood, that will allow real-time flooding to be reported. Initially, it will only be available on Android phones, but Seo hopes to raise enough funding to develop an Apple version of the app. 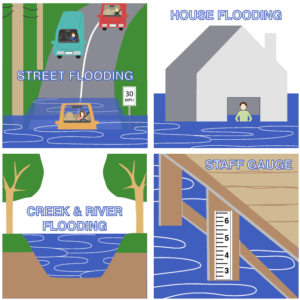 The free app adds another layer to existing flood gauges and will work with the network of CASA (Collaborative Adaptive Sensing of the Atmosphere) radars stationed across the Dallas-Fort Worth area.

“We want to gather as many observations as possible through crowdsourcing to improve model prediction accuracy,” Seo told the Fort Worth Star-Telegram.

At the same, UTA is also adding weather sensors across Fort Worth to provide more detailed flooding information. On Thursday, one was placed above Sycamore Creek and it will provide data the next time the creek starts rising.

“For small urban areas we need to have additional observations to make sure that the models are realistic or reasonable,” Seo said. “We are using these observations to assimilate all available data to make the model predictions more accurate.”

Ten sites are being monitored around the Fort Worth area. There are plans to add more in Grand Prairie, Dallas, Arlington and Kennedale.

Greg Waller, senior coordination hydrologist with the National Weather Service West Gulf River Forecast Center, said flash flooding can be highly localized. In the April 30 flash flood that killed 6 people in Palestine, one creek rose rapidly while another nearby tributary stayed in its banks.

“Anytime you give data to a scientist, it is going to be a good thing,” Waller said. “A rain gauge adds the verification. It adds the validation so that when we say there’s flash flooding because this sensor in this creek says it’s flooding, it adds more meaning to the warning.”

With several rounds of storms expected over the Memorial Day weekend, Waller said drivers will need to pay attention not only in North Texas but if they’re traveling to Central and East Texas.

“If you’re along the river, you should expect the rivers to rise,” Waller said. “Right now, rainfall intensity may matter as much as the actual rainfall total.”