Geologists have long known that New Orleans is slowly sinking – but now, scientists using radar technology say groundwater sucked up by industrial facilities such as a power plant, oil refineries and chemical complexes may be contributing to the problem and could even be undermining levees.

This new study is the latest attempt to explain a perplexing problem threatening the survival of a low-lying region at risk of being swallowed by the Gulf of Mexico: gradual sinking, or subsidence. 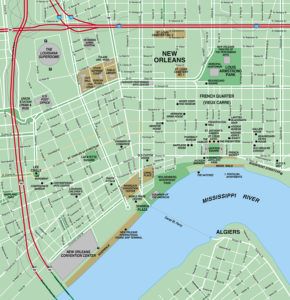 The study, published this week in the Journal of Geophysical Research, mapped subsidence across the New Orleans region using radar images for three years between June 2009 and July 2012.

Something popped out: Two spots with industrial complexes saw very high subsidence rates, where sinking was measured between about an inch and 2 inches a year. By comparison, sinking in other places in the metropolitan area ranged from about 1/10th of an inch to 1/4 of an inch a year, the study found.

Both of the hot spots for subsidence are next to critical flood-protection infrastructure.

The study concluded “groundwater withdrawal is the primary subsidence driver in areas with major industry around the New Orleans (area).”

“It’s a correlation, quite a strong correlation,” said Cathleen Jones, the lead researcher on the study from NASA’s Jet Propulsion Laboratory in Pasadena, California.

The researchers found severe subsidence around a 1960s-era Entergy New Orleans electric power plant in Michoud, a swampy area about 9 miles east of the French Quarter. Sinking has been a problem for years there and poses problems for levee builders because it’s a frontline in defenses against hurricanes.

Radar imagery revealed sections of levees, rebuilt higher after Hurricane Katrina, were subsiding by as much as 2 inches a year. Nearby lies a massive $1.1 billion barrier built after Katrina. It’s nearly 2 miles long and designed to stop hurricane surges. The study did not say whether that structure had subsided.

Since the 1960s, the power plant has been sucking up groundwater for cooling purposes.

Charlotte Cavell, an Entergy spokeswoman, said the old plant is scheduled to be deactivated June 1 although the company is looking at building a smaller power plant on the site “in the near future.” Entergy has not decided whether to use groundwater in the new facility, she said.

She said the company was “not aware of any link between the Michoud plant’s use of groundwater and subsidence in New Orleans.”

On the western side of New Orleans, researchers found high rates of subsidence in a cluster of chemical and oil refinery plants in an area called Norco, Louisiana.

The facilities are near the Bonnet Carre Spillway, a 1930s-era structure that protects New Orleans from Mississippi River flooding. The study called the spillway “the last line of protection” from river flooding and said an “investigation of possible subsidence impacting the spillway directly is needed.”

However, scientists not affiliated with the study said it’s also far from clear if a link between industry’s water use and subsidence can be made.

For example, USGS data shows industrial use of groundwater around the Bonnet Carre Spillway facilities is not huge, which would seem to undercut the idea groundwater use is causing sinking there.

“There’s so much subsidence going on in New Orleans and the coastal area it’s hard to pin it on anything,” said John Lovelace, a USGS scientist in Baton Rouge.