State lawmakers are getting out of a dispute between New Orleans Saints owner Tom Benson and the NFL team’s players about how to handle workers’ compensation claims for professional athletes. 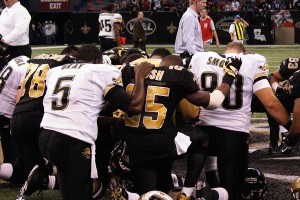 The proposal would calculate workers compensation for professional athletes based on recent earnings, not future possible wages.

“I think that the bill moving as far as it had generated some healthy discussion between the parties and with me, and so I would like to see whether they can continue the dialogue with me to come up with something that both parties can live with,” Broadwater said.

The measure had received House support, but opposition intensified as it headed to the full Senate for debate. Saints players had planned to visit the Louisiana Capitol this week to urge senators to vote against it, and the bill narrowly got out of the Senate labor committee.

“The fight in Louisiana proves that players are personally invested in their health and safety. Now is the time for the NFL to take greater leadership on the issue of workers’ compensation to ensure players have equal treatment in every state,” Eric Winston, president of the NFL Players Association, said in a statement.

Players receive per diems during offseason workouts and training camp. Under Broadwater’s bill, workers’ compensation benefits could be based on per diems – rather than the full annual value of a contract – if injuries occurred in the offseason, giving a player far less money depending on when he gets hurt.

Supporters of the proposal said it would pay athletes’ workers’ compensation under the same rules that other Louisiana employees have. Representatives of the Saints said state appeals courts sided with the team’s interpretation of workers’ comp benefits in six of seven lawsuits on the issue between former players and the team.

Opponents of the bill said players hurt in the offseason shouldn’t get any less for their injuries than if they got hurt in a regular season game. They said the proposed change could discourage professional athletes from coming to Louisiana.

Broadwater said if the two sides don’t reach a deal before the 2015 regular legislative session, he’ll bring the bill again.

“I would much prefer them be part of coming up with a solution that everybody could live with. If they don’t, I’ll be back next year and seek to impose a legislative solution. But I’m hopeful that won’t be necessary,” he said.