Attorneys for Lance Armstrong argued Friday that he shouldn’t have to return to arbitration with a Texas company over million-dollar bonuses he received for winning races even if it was revealed years later that the cyclist lied about taking performance-enhancing drugs during his spectacular career.

SCA Promotions of Dallas sued shortly after Armstrong acknowledged last year that he had lied for years about doping. It then asked an arbitration panel to reopen a 2006 settlement it reached over about $12 million in bonuses it said it paid for three of Armstrong’s seven Tour de France victories. He has since been stripped of all seven victories and given a lifetime ban from sports. 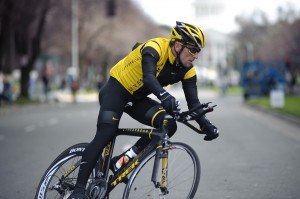 The panel voted 2-1 in October to review the case. Armstrong’s attorneys want Judge Tonya Parker to overrule the panel, saying the arbitration case is closed.

Jeff Tillotson, an attorney for SCA Promotions, said something had to be done when a party in the case “lied at every step of the way.” The language of the settlement allowed the panel to handle any future claims about that settlement, he argued.

“You tried to hurt us – legally, (in) public relations,” Tillotson said. “What’s the penalty for that?”

Tillotson also said Armstrong’s attorneys had previously tried to get the panel to issue sanctions after the settlement against his side.

Armstrong’s attorneys say state law protects their client in such cases. Even if Armstrong lied under oath, that would not be enough to reopen the case, said Tim Herman, Armstrong’s longtime attorney.

“There is no case … that gave an arbitration panel any authority beyond the conduct of the proceeding that was going on before them,” Herman said.

Parker said she would issue a ruling soon, likely early next week.

Armstrong, who didn’t attend the hearing, has faced several lawsuits related to the millions of dollars he amassed as a cyclist. The biggest is a federal whistle-blower lawsuit over his team’s previous sponsorship by the U.S. Postal Service that could lead to fines of more than $100 million.

He settled a smaller suit late last year with Nebraska-based Acceptance Insurance over $3 million in bonuses.