Louisiana residents and parish officials are lobbying the Army Corps of Engineers to include Ascension and St. James parishes in a massive hurricane protection project.

The Advocate reports the Army Corps met this past week with local interests as part of a public-comment process associated with the west shore hurricane and storm damage risk reduction study.

A draft report on the project was released in August. 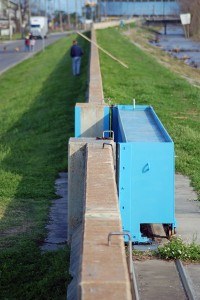 Ascension and St. James residents, as well as the Pontchartrain Levee District and other groups, support a plan known as Alternative D that extends the levee westward.

Levee District President Steve Wilson said at the hearing that his agency wants to build the Alternative D levee.

“If it takes us putting up the additional money, along with Ascension and St. James, we’re going to build Alternative D,” he said.

The plan calls for a 28-mile levee that would tie into Ascension’s Marvin J. Braud Pumping Station farther west, but also includes a vast swath of wetlands, including part of the Maurepas Swamp Wildlife Management Area.

Alternative D’s total cost of $891 million is the most expensive of the plans, but would be just $11 million more than what the corps has tentatively recommended.

Proponents claim the route, which tracks just north of Interstate 10, would provide 100-year storm levee protection for all of St. James and the southeast corner of Ascension, in addition to the protection for St. John the Baptist and St. Charles parishes.

Henry Graham, vice president of public affairs with the Louisiana Chemical Association, said Alternative D is the best option for the chemical industry in the River Parishes, where the majority of its members are located.

“Our most important resource is our people,” he said. “If our people can’t get to the plants, you don’t get the oil, plastics and other necessary products created.”