Three of the most damaging and costliest hailstorms in Austin’s history have all occurred on March 25. While Texas usually waits for the months of April and May to experience its worst thunderstorm activity, March 25 stands out as the one day in the past 20 years to watch out for.

“We now call March 25, clean out your garage day,” said Paul Yura, warning coordination meteorologist for the National Weather Service Office in Austin/San Antonio. “Cleaning out your garage is going to give you space to move your car in for safety.” 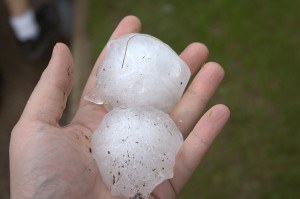 The three storms occurred in 1993, 2005 and 2009. In 1993, hail up to the size of tennis balls fell in north, northwest and far eastern portions of Austin. In 2005, high winds and large hail struck Lake Travis, west, central and portions of northeastern Travis County. In 2009, large hail struck during afternoon drive time clobbering motorists stuck in traffic along with homes and businesses along the Travis/Williamson County line.

Yura said residents of south Austin have just been lucky.

“All told, Austin experienced just under a half billion dollars in insured losses from these storms,” said Mark Hanna, a spokesman for the Insurance Council of Texas.

Yura said the March 25 storms were the result of a typical weather patter this time of year when strong southerly winds bring moisture from the Gulf colliding with cold fronts coming from the north.

The forecast for this Monday, March 25, calls for partly cloudy with a high of 62.