Power fluctuations during rehearsals for the Super Bowl led organizers to use generators at Sunday’s game, which was then interrupted for 35 minutes by a partial blackout, a National Football League official said. 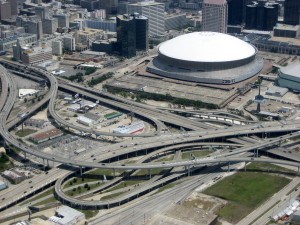 About half of the Superdome in New Orleans went dark early in the second half of the contest between the Baltimore Ravens and the San Francisco 49ers, creating a huge embarrassment for the NFL.

Eric Grubman, the league’s executive vice president of business operations, said officials noticed “fluctuations in the frequency of the power supply” during rehearsals, and feared the issue would pose problems for high-definition television cameras.

“Since we did not want any issues at halftime with TV cameras or other gear related to the frequency fluctuations, we decided it would be best to use generators designed for the type of power demand presented by the show,” Grubman said in a statement released on Tuesday.

During the disruption, players stretched and chatted with each other and waited patiently for the lights to return.

The 49ers, who had been outplayed to that point, scored 17 consecutive points after the game restarted but came up just short, losing 34-31.

Grubman said it was unlikely the outage had anything to do with the halftime spectacular by pop star Beyonce, whose show featured a dramatic pyrotechnics display.

“The power outage occurred well after the halftime show and well after any of its unique demands on power supply or power quality had ended,” Grubman said.

Entergy Corp, the utility providing power to the Superdome, said its distribution and transmission feeders were serving the Superdome at all times.

Equipment designed to monitor electrical load sensed an abnormality in the system where the Superdome equipment intersects with Entergy’s feed into the building, triggering an automatic cut in power, Entergy said in a joint statement on Monday with the Superdome’s management company, SMG.