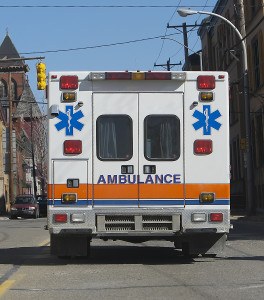 A West Texas man accused of swiping an ambulance, driving to a grocery store and stealing frozen foods has landed in a different kind of cooler.

El Paso police on Tuesday announced the arrest and jailing of John Valdivia of El Paso on theft charges. Bond has been set at nearly $10,200.

An ambulance was stolen Monday night from the emergency parking area of Del Sol Medical Center. Police say the vehicle was taken while waiting to transport a patient.

Police say Valdivia allegedly drove to a market and tried to slip out with some frozen foods. He was followed by grocery store personnel into the parking lot and police were alerted.

Police had no information Tuesday on an attorney for Valdivia. Details on the frozen items weren’t immediately released.