In his first year as insurance commissioner of Oklahoma, John Doak was a busy man. 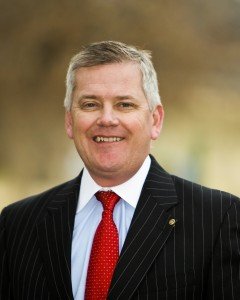 Doak and the agency he leads had their hands full implementing reforms in the workers’ compensation system, dealing with a host of natural catastrophes, encouraging insurers to offer more products and services in the state, and working with the governor and legislature to foster an “Open for Business” environment in Oklahoma.

A former insurance producer and agency principal, Doak believes in fostering a competitive, market-based approach to resolving insurance issues while continuing to serve consumers through outreach and regulatory protections.

Doak took over as insurance commissioner of Oklahoma in January 2011. Since then he’s been active in raising the public profile of the insurance department along with promoting the business climate in his state. And as a former insurance agent himself, he is a strong advocate for the role agents and brokers play in the insurance process.

In what could be described as trial by natural disaster, during his first year in office Oklahoma was hit by flooding, high winds and hailstorms, tornadoes, wildfires and earthquakes.

While small earthquakes are fairly common in Oklahoma, on Nov. 5 2011, the central region of the state experienced a magnitude 5.6 earthquake that was felt as far away as Kansas City to the north and Dallas to the south. More than 300 homes were impacted in Oklahoma’s Lincoln County, Doak says.

The quake was something of a wakeup call with regard to the sale of earthquake insurance in the state. Only about 1 percent of homeowners carry the coverage. Doak says the insurance department, as well as the insurance industry, needs to a better job of informing consumers about the need for and availability of the coverage.

“We’ve known that there’s been tremors and shocks in Oklahoma for many, many years,” Doak says. “That is something that all insurance agents and brokers need to be talking about with their clients in our area, dotting their ‘I’s and crossing their ‘T’s, related to making sure that they know that earthquake coverage is available.”

Doak says the department is currently working on public service announcements intended to raise public awareness and he’s reaching out to the industry to increase interest in offering earthquake coverage in Oklahoma.

“Some of the markets from around the world are beginning to look at Oklahoma to place that coverage. I think they’re doing some risk mapping and some underwriting analysis,” Doak says. “We have a very vibrant market currently, and I believe that that will expand in the future.”

While the state has seen an increase in the number of earthquakes annually during the past few years, Oklahoma is routinely battered by other types of natural catastrophes. It has “more tornadoes per square mile than any other state,” Doak says, “and we feel that we should be now having an annual discussion about how to better serve the consumers, not only in Oklahoma but around the country.”

“My chief of staff is a FEMA-certified instructor, Paul Wilkening,” Doak says, “and we’ve reached out. We have Farmers Insurance, Kim Decker, who helps lead the CAT team from the industry side, along with John Wiscaver of Oklahoma Farm Bureau. We have two seasoned professionals and about 20 other folks that are participating in this.

“The outcome of this is going to be on March 12th through 13th. I believe it may be March 11th, 12th and 13th here in Oklahoma City. We’re going to have the first annual National Tornado Conference, and it’s something that we want to tell you more about and tell your readers about. But it’s going to be a summit which we can deal with the claims side of things. Regulators will be invited. Vendors will be invited. We’re going to have some breakout sessions for law enforcement.”

We are “letting them know that we, being a new regulator and being one of the few that have actually ever sold a policy or worked with a client across the dinner table to across the board room, want to deal with the insurance companies fairly. We want to assist them in their business needs, and we’re very appreciative of them offering their coverages to our consumers,” Doak says.

The insurance department’s initiative works hand-in-hand with the Open for Business program being promoted by Gov. Mary Fallin, he says. “We believe that, from our geographic location, from the East Coast to the West Coast, Oklahoma is a good place to do business in.”

“We need to put Oklahoma on a level playing field with our surrounding states regarding workers’ compensation. It’s one of the highest in the country on certain aspects. But we believe that the reform which came in with our new governor and our new legislature, that those reforms are going to continue. It’s very, very important for our viability as a state.”