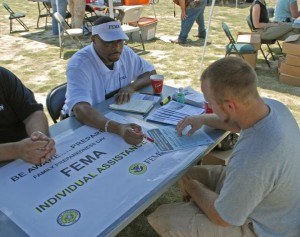 When the Federal Emergency Management Agency mailed out 83,000 debt notices this year to victims of Hurricane Katrina and other 2005 storms, one of the letters showed up in David Bellinger’s mailbox. Bellinger, who is blind, needed a friend to read it and break the news that FEMA wants him to pay back more than $3,200 in federal aid he received after Katrina.

“I nearly had a stroke,” recalls the 63-year-old, who moved to Atlanta after the storm wrecked his New Orleans home. “I’m totally blind. I subsist entirely on a Social Security disability check. If I have to pay this money back, it would pretty much wipe out all the savings I have.”

Many other Gulf Coast hurricane victims are in the same position, angry and frustrated at the prospect of repaying money they spent years ago as they tried to rebuild their lives.

FEMA is seeking to recover more than $385 million it says was improperly paid to victims of hurricanes Katrina, Rita and Wilma. The debts, which average about $4,622 per recipient, represent slightly less than 5 percent of the roughly $8 billion that FEMA distributed after the storms. At least some of the overpayments were due to FEMA employees’ own mistakes, ranging from clerical errors to failing to interview applicants, according to congressional testimony.

But the agency says it is required by law to make an effort to recover improper payments, even if the recipient wasn’t at fault. Last week, however, Congress approved legislation that would allow FEMA to waive many of the debts. President Barack Obama signed the measure – part of a $1 trillion spending package – into law last Friday.

FEMA spokeswoman Rachel Racusen said the agency is reviewing the law’s provisions and developing a plan to implement them. It remains to be seen how many recipients of FEMA money could benefit from the change.

Sen. Mary Landrieu, a Louisiana Democrat who sponsored the provision, said disaster victims shouldn’t be punished because FEMA was “dysfunctional.”

“They have significantly improved the process,” Landrieu said. “This is very unlikely to happen again.”

Racusen said the agency has implemented “strong protections” to avoid making improper payments, reducing its error rate from about 14 percent after Katrina to less than 1 percent for more recent disasters.

“We have also worked to significantly improve the recoupment process so that it is more understandable and provides due process for both disaster survivors and taxpayers,” she said in a statement.

FEMA’s collection efforts aren’t limited to the 2005 storms. The agency has mailed out more than 6,000 debt letters to survivors of other recent disasters, including floods.

Approximately 2,500 recipients, including 930 victims of the 2005 hurricanes, have appealed their debt notices. FEMA says about 30 percent of those appeals successfully erased at least some of the debt. Recipients also can ask for a waiver due to economic hardship or seek to set up a payment plan.

“It is important for any individual who has received a recoupment notice to know that these letters are the start of a conversation with FEMA, not the end,” Racusen said.

This isn’t the first time Bellinger has tangled with FEMA over funds he received to pay for renting an apartment in Atlanta. He was a plaintiff in a class-action lawsuit over the agency’s decision to end housing subsidies for storm victims and its efforts to recover alleged overpayments. FEMA later paid more than $2.6 million to settle the claims.

That case had also delayed the debt collection process that Bellinger and other storm victims are now facing. Before the settlement, a federal judge in New Orleans ordered FEMA to suspend the effort in 2007 while it drew up new guidelines for the recoupment process. FEMA reinstituted the process earlier this year.

“What a way to celebrate Christmas, knowing I’ve got another FEMA battle on my hands,” Bellinger said last week.

After Bellinger moved to Atlanta, the U.S. Department of Housing and Urban Development covered some but not all of his rent. He says he relied on FEMA’s aid to make up the difference. FEMA claims he received a duplication of benefits, but Bellinger said the agency is mistaken.

“The fault is theirs, not mine, and they have to suffer the consequences,” he said. “I submitted everything they required. As far as I know, I did nothing wrong.”

Lubertha Haskin, a Gulfport, Miss., resident who turned 80 on Dec. 27, received about $8,000 from FEMA to repair some of Katrina’s damage to her home and replace belongings. In October, FEMA sent her a debt letter that said her insurer had covered the same costs, a claim Haskin denies.

Haskin said she hadn’t heard from the agency in five years and never suspected she could have to pay back the money.

“I was knocked for a loop,” she said. ” don’t have that kind of money. I have a lot of doctor’s bills and other bills to pay.”

Law firms and legal aid groups have volunteered to help Haskin, Bellinger and many others challenge FEMA’s recoupment efforts.

“It’s really unfair that the government waited this long to come after this lady,” said Haskin’s lawyer, Beau Cole. “They didn’t deliberately do it, but the effect is the same.”

The New Orleans office of Southeast Louisiana Legal Services, which offers free legal aid, has fielded more than 100 calls since September from people who want to challenge their FEMA recoupment letter. Rowena Jones, a lawyer for the group, said she hasn’t seen the appeals process yield any “actual results.”

“Our clients just don’t seem to be getting a fair opportunity to contest the notices and get a hearing on it,” she said.

The provision signed into law last week allows FEMA to completely waive the debt for somebody who earns less than $90,000 a year if the money was mistakenly awarded due to an error by FEMA. A debt involving fraud cannot be waived. Racusen said FEMA is “committed to applying the law to the fullest extent possible.”

U.S. Rep. Bennie Thompson, D-Miss., said the recoupment process is flawed. Many debt letters have been returned as “undeliverable,” meaning some people moved and don’t even know they owe money, he said.

“Most of these individuals went through a lot of trauma,” Thompson said. “For our government to all of a sudden say, ‘We made a mistake, you owe us money,’ that’s not how it should be done.”